The final round of the regular season in Serie A1 revealed the name of the club that grabbed the last spot, spot number eight, for the quarterfinals of the playoff – Metalleghe Sanitars Montichiari. 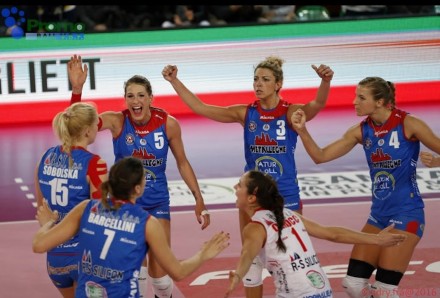 The team in whose gymnasium this season’s Final Four of the CEV Champions League will be played (April 9-10), reached the second stage of Italian Championship for the second consecutive year. Montichiari finished regular season ahead of Unendo Yamamay Busto Arsizio (current runners-up of the Champions League) who missed their “match ball” for quarterfinals at home court against Nordmeccanica Piacenza (0-3).

In first round of the playoffs, Montichiari will face leaders Imoco Volley Conegliano who suffered defeat to Il Bisonte Firenze (3-1) but already secured pole position. Firenze had the most efficient player in the final round of Serie A1 – The Czech opposite hitter Tereza Vanžurová with 21 points.

Reigning champions Pomì Casalmaggiore kept second position in the standings by beating Club Italia. The ‘Pink team’ coached by Massimo Barbolini will begin the defense of a title versus Foppapedretti Bergamo.

The playoffs will start on April 12 and these are the pairs of the quarterfinals:

CEV CUP M: Paul Carroll – “We will drink some vodka”