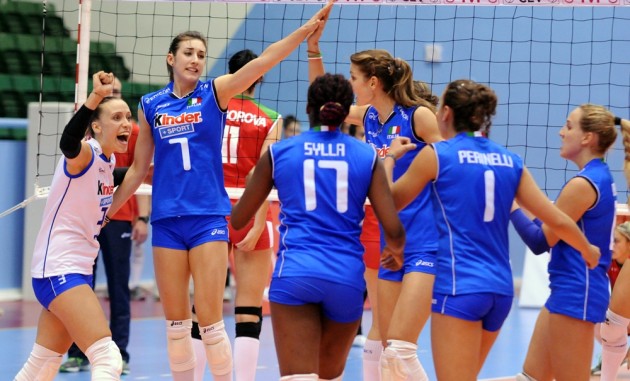 Bulgaria performed beyond expectations in the first set and surprised Italy with strong serves. However, Italy managed to fight back with wing-spiker Miriam Sylla on fire (15 points). Elena Perinelli and Cristina Chirichella both scored 14 kills. Italy led 8-6 at the first technical timeout in set No. 1, before Bulgaria started to turn the tables with the help of some sharp serves of middle-blocker Milena Dimova (16-13). The Italian players tried their best, but couldn’t find an appropriate answer to stop the Bulgarian express. However, Italy made a good start into the second set. The “squadra azzurra” took over control, putting a lot of pressure on the Bulgarian defense. As a consequence, Italy won the second set 25-21 and kept the upper hand in the third period after a tough beginning. Italian head coach Marco Mencarelli had found some magic words at 9-12 to lead his team back to the winning road. Things didn’t change in the fourth and last set with Bulgaria committing too many unforced errors. After 95 minutes of play, Italy celebrated its first win at 2012 CEV Junior European Championship – Women.

Italy coach Marco Mencarelli: “The first win was very important for us because we always experience some problems getting into tournaments and we often face situations like in the first set. Bulgaria served very well at the beginning. But later on they started making more mistakes, and we improved our passing skills. The first game is always very important and we are glad to be the winners today.”

ECJ W: Russia made a strong start in the Pool II

ECJ W: Poland won in the first round