What a volleyball day in Serie A1! Both semifinal series will go into Game 4! 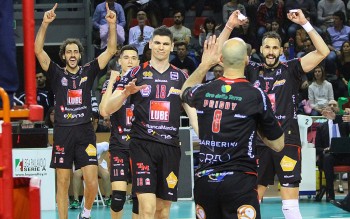 Brawls, red cards, high tension and spectacular volleyball. That is the shortest way to describe this Thursday night in Serie A1 Playoffs. But the most important thing is that Lube and Trentino are still alive!

In Civitanova, Lube were at the very edge of suffering a shocking express elimination! The hosts have already been losing 0-2 in wins against Perugia, while they were also down by 1-2 in sets in the Game 3! The away crew even had two match points in the fourth set at 24:23 and 25:24… They failed to use any of them and they were punished.

Ivan Miljković! The captain of Lube finished the fourth set by a stunning ace – 27:25 – so the game went into the tie-break, while the Serbian bomber played the key role there as well. At the score 12:12, Miljković made one of the most funniest serves in his career, as the ball went way in front of him… But, that serve tricked Perugia defense and Lube scored a point from a counter-attack – 13:12!

The hosts missed the first match point at 14:13, but they used the second one as Denis Kaliberda spiked the ball out of bounds! It is also worth mentioning a fantastic performance of Osmany Juantorena, who scored 27 points for Lube in this match!

Still, the Game 3 between Lube and Perugia was also marked by a brawl in the third set in which Aleksandar Atanasijević and Luciano De Cecco got into a conflict with William Priddy and Micah Christenson, so the second referee had to stand between them to prevent any physical contact.

In the other semis, Trentino have made a huge break in Modena and reduced the overall score in the series to 1-2 in wins! The crew coached by Radostin Stoychev triumphed after 4 sets, while the hero of the winning side was Matey Kaziyski (18 pts) who scored the very last point on the game with a block-out spike.

Still, Kaziyski was also involved in some bad scenes on the court, as he had a serious verbal argument with Bruno Rezende during the third set. Both players received red cards from the referee.

BUL W: Maritza PLOVDIV one win away from title

That’s the way Superlega is the best and most funny leagues in the world! Volleyball’s stars (Priddy-Christenson vs De Cecco_Atanasjevic, Bruno vs Kaziyski) who quarrel among themselves and brawls everywhere. Love so much 😀