The Block Devils will play for the championship title! 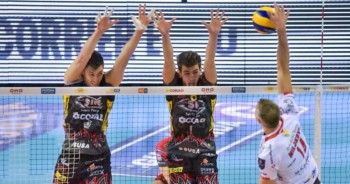 Sir Safety Perugia have defeated Lube Civitanova in the Game 4 of the semifinals and closed the series by 3-1 in wins!!! It means that the Block Devils will play in the Serie A1 Finals for the second time in their history!

Pala Evangelisti was fully packed for the Game 4! The fans were very aware that their team need just one more step to advance to the big finals, so they came in large number to help out the players. And, together, they have done it!

Sir Safety Perugia have been a dominant side from the first to the last point! They seized the opening set by 25:20, while the following one was just a bit more close. Simply because Lube Civitanova managed to return from 11:16 to take the lead at 17:16 (!!!), mostly thanks to amazing serves and spikes of Ivan Miljković. However, Perugia quickly regained their foccus. The hosts got back in front and finished the set by a block-out spike – 25:23.

The third and the final set was the most exciting. Perugia were constantly in the lead, but Lube managed to reduce the margin to just 20:19 and a few moments later to tie the score at 23:23!!! The hosts scored the following point for 24:23 and then had a counter-attack to finish the match… But, the visitors managed to defend themselves and to equalize at 24:24.

The next point was perhaps the crucial one. Lube had a counter-attack and they organized a perfect play… Micah Christenson placed a ball for Marko Podraščanin who made a good spike… But, Perugia defense miraculously kept the ball above the floor, while Aaron Russell scored a point from the second team ball-touch – 25:24!!!

Perugia did not use their second match point – 25:25 – but they did use the third one – 26:25. After a great serve, Lube could not organize a good attacking play, so they set the ball to Ivan Miljković, who was far away from the net. He spiked the ball out of bounds – 27:25!

It was over. Perugia have qualified for the Serie A1 Finals.

This semifinal is just another proof…Christenson is one of the most overrated setter in the league. De Cecco, Bruno, Baranowicz, Giannelli, Hirrezuelo are way better than him. Sorry Micah, you should learn how to handle the pressure in a real league: this is the Italian volleyball league not the NCAA tournament.

@zb87 not overrated lube is not playing well after 20days of break after the quarterfinals don’t blame him, volleyball is not a one men game it’s a team

@Dee jae69 World Cup award… So what? The overall level of Superlega is by far better and more diffult than World League, in which there were only 4 or 5 good teams

@zb87 Little out of topic, please tell that to his award in World Cup..Going back, this is his debut to the international league and why compare to the veterans (except for Gia)? I’d agree to dee jae that Lube lost their rhythm with that hiatus..anyways, congrats to Perugia and goodluck in the finals

@Seeker That’s exactly what I mean, guys. I agree when you say it’s a team sport and very few players in Lube had a good year, I’m not blaming him for the bad results of his team. Lube should have won everything this year and they didn’t play a single final! But if you are an awarded player, we expect you to make the difference; Christenson never did it when his team needed it (semifinals in the Italian Cup, Champions League and Playoff). He melted against Trentino in the Champions League semifinal when his spikers get block 12 times in 3 sets and he also get switched. He played poor volleyball and he was very nervous during the last 4 games against Perugia, where if not for Juantorena monster performance in game 3 it would have been a 3 games semifinal…I’m not saying he’s a bad player, I saw him with the US NT and he can do great things, but in my opinion he’s not at the same level of the other setters in the league. Not yet.

ITA M: Stoytchev likes being back in...