Modena have become the champions of Italy after 14 years!!! 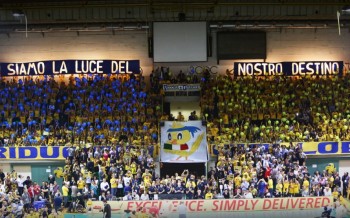 The long wait is over. Scudetto returns to the Yellow city! In the epic Game 3 of the Serie A Finals, Modena defeated Perugia and reclaimed the championship trophy after 14 years! And it all happened after a miraculous comeback in the tie-break…

Perugia were twice in the lead as they were ahead at 1-0 and 2-1 in sets, but Modena managed to take this match into the fifth set. The tie-break had a shocking start for the hosts…

Two great blocks and two out-of-bounds spikes – Perugia quickly escaped to 4:0! Only couple of moments later the visitors increased their lead to 8:3! It looked like the final series is heading toward Game 4…

However, then Luca Vettori came to the service line and Modena reduced the margin to 8:6! Perugia seized the following point – 9:6 – but Modena answered back – 9:7 – and it was time for Nemanja Petrić to serve… The Serbian player completely changed the flow of the tie break! With several amazing serves Petrić pushed Modena in front – 10:9!!!

The margin remained the same until 12:11 when the crucial moment happened. Aaron Russell of Perugia spiked the ball out of bounds – 13:11 for Modena! The hosts needed two more points to clinch the title. Lukas Saatkamp won the first one – 14:12 – while the last one came after a service mistake of Aleksandar Atansijević, who simply had to take the risk with a strong serve but the ball ended up hitting the net – 15:13!

Modena have therefore won their 12th title in club’s history, exactly 14 years after the previous one!

SRB M: Five in a row! Crvena zvezda are the champions of Serbia!

ITA M: Trentino and Modena get away...