Cucine Lube coach Ginalorenzo Blengini finally welcomed his first medal at club level. And not an ordinary medal, but gold. That’s way he could not hide his emotions upon beating Diatec Trentino in Italian Men’s volleyball Cup final. 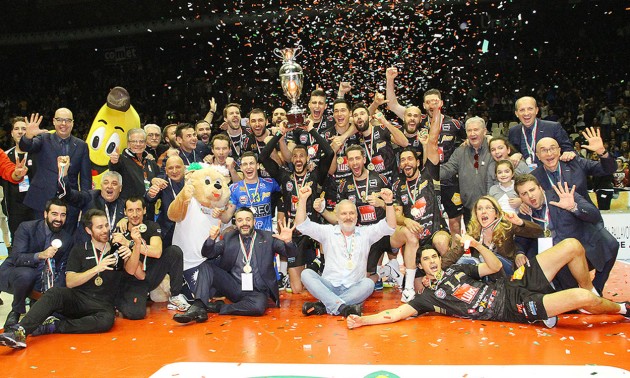 „I dedicate this success to my family and to the guys in the team who have been fantastic, not only today. We were humble and aware of not having won anything until tonight. Today, we had a substantial test of character, playing point by point even in difficult moments, with more continuity than in the game yesterday. Which is so important, players are so dedicated, and it is a privilege to train these champions. As for the players who play less – they would play as starters in any other team but they are always ready when called to step in. When you have such a team, the only thing coach has to do is to accompany them,“ Blengini stated after the final game.

Osmany Juantorena had an important role in winning a trophy…

“This is a great satisfaction. We were tired from the five sets yesterday but we gave everything on the floor. After the defeat against Trento in the semifinal, a year ago, this time we took revenge thanks to a good performance from the whole team. We were always keeping a high level of our play,” Cuban-born player told after the match.

SUPERCOPPA LIVE from Modena: Grebennikov – „We...