Samuele Papi and Hristo Zlatanov made the history of one of the best Italian Men’s volleyball clubs ever, LPR Piacenza, and both were honored for their achievements on a special occasion “Papi e Zlaty Day”. 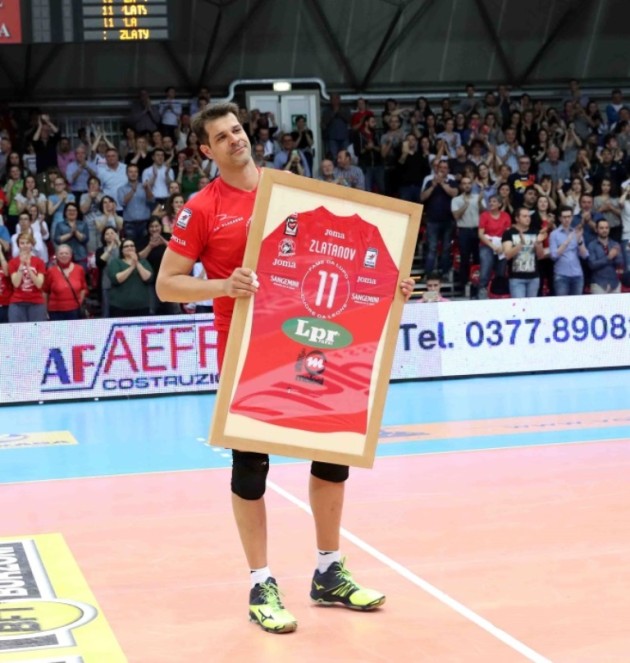 Before Game 3 of the Italian Men’s volleyball Championship (Lega Pallavolo Serie A UnipolSai) Playoff Challenge (playoff for the 5th place that secures a spot in the CEV Challenge Cup next season) between hosts LPR Piacenza and Top Volley Latina, Piacenza honored Samuele Papi and Hristo Zlatanov for their achievements in the red and white jersey during the last 20 years combined. Both decided to end their professional volleyball careers at the end of the season.

Zlatanov wore the jersey of Piacenza in the last 14 seasons during which he won Italian Championship and Italian Super Cup (2009), Italian Cup (2014), CEV Cup (2006), CEV Challenge Cup (2013), took MVP award 75 times and became the best scorer in the history of Italian volleyball with his 9,688 points. As a result of all this, his jersey number 11 has now been withdrawn.

Many ex-players of Piacenza and volleyball superstars recorded a video or said a few words on the scene in the honor of Papi and Zlatanov:  Marco Meoni, Ségio Santos ‘Serginho’, Nikola Grbić, Robertlandy Simón, newly elected President of the Italian VF (Fipav) Bruno Cattaneo…