Italy: In Molfetta to get into the Cup Final Four

CheBanca! Milano: Milan has reached an important and exciting moment of the season. 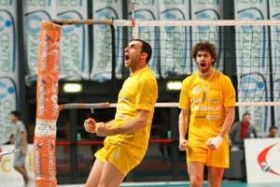 In Molfetta to get into the Cup Final Four

Following Sunday’s very difficult game against the league leaders, Moretti’s boys will take on Molfetta away from home in the Italian Cup quarter finals.

One single game for a ticket into the last four of the competition.

The only meeting between the two teams was this season when Molfetta came out on top 3-1.

“The Italian cup is an important competition for us – said Bonati – We’re up against the surprise team of the season, which is coming off an unexpected victory over Segrate. They’ll have the court advantage but we’ll try to play a great game to make up for this”.

Italy: Hosting Milan in the cup