Small and agile Chinese Taipei proved too strong for the hapless Mexico to demolish the unfancied Norceca rivals in a lop-sided Pool D battle 25-12 25-19 25-14 to capture their first victory in the Girls’ U18 World Championship at the Liptapanlop Hall on Monday. 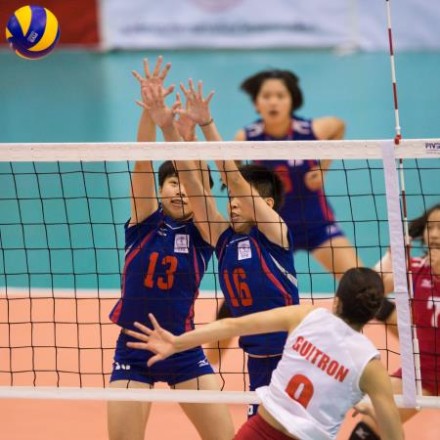 Chinese Taipei, which went down 0-3 to reigning champions Turkey and 2-3 to Peru in their previous two matches, came back much stronger this time. Powerful hitter Chen Tzu Ya penetrated the Mexico’s defence with her exceptional spikes to help her team take the effortless opener 25-12.

Mexico, having yet won a set in this top-notch competition, showed a consistent play in the second set. Fernanda Baruelos found some gaps in the Chinese Taipei’s room with her explosive attacks to help Mexico narrow the margin 15-22. The Asian rivals, however, still had enough in their tank to hold them off. Chinese Taipei won the set 25-19.

In the third set, Mexico made unforced mistakes with poor first-ball reception, while Chinese Taipei played more confidently to win several crucial points. As expected, Chinese Taipei clinched the set 25-14 and the match.

Tseng Wan Ling scored a match-high 13 points for Chinese Taipei, with Fernanda Baruelos emerged as the top scorer of Mexico after collecting nine points. Following the win, Chinese Taipei improved their win-loss record to 1-2, with Mexico sinking to 0-3.