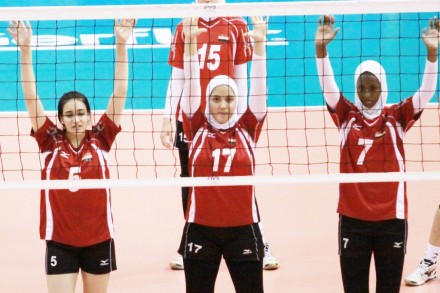 This is the first victory for any African team in this competition raising their win- loss ratio to 1-3 at the end of their matches in pool A. Tunisia dropped to 0-3 and still have a window to qualify to the round of 16 when they meet Thailand on the last preliminary round day.

Egypt played best game in the competition till now having disciplined defense and attacks, but their wing spiker Mai Moustafa made the difference with her unstoppable hits making 12 points as her team scorer followed by the middle blocker Heidy Kandeel who scored 11 points including 5 blocks.

From the Tunisian side both attacker Jihen Mohamed and Emna Khalifa scored 12 points as their team scorers.

What made the difference for the Egyptian side were the blockers who won 9 points from dying blocks against a lone successful block from the Tunisian side.