NORCECA CH M: Canada in semifinals after win against Mexico

Host team, Canada classified to the semifinals after beating Mexico 3-0 (25-22, 25-15, 25-12). John Gordon Perrin registered 20 points for the Canadian team, while Dallas Soonias closed with 15. For Mexico, Tomas Aguilera had a seven points performance. 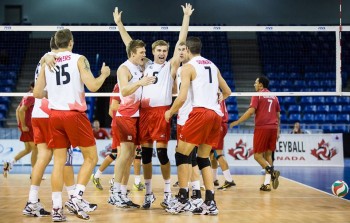 Canada had a huge advantage in the blocking game settin a 12-3 points difference. Canada and The United States have a bye date on Thursday.

“It was a difficult night. We faced such great rivals that adjusted their block and had a very good serve. We could not have our best match tonight,” said Mexican captain Jorge Quinones.

“They pushed us on the first two sets and had a very good defense and made us work for every point. I think they are missing some important players that  might help them and fought for every point,” remarked Canadian captain Fred Winters who celebrated his Birthday in the match against Mexico.

“Congratulations to Canada for a magnificent team and the way they play as well as the quality of their players. We could not control their serve and that really affected us,” stated Mexican coach Sergio Hernandez.

Coach Glenn Hoag, could not count on with Gavin Schmitt due to an injury.

“The diagnosis is not very good, is a stressed fracture that He has in his tibia since World League, so We don’t think He would be able to play. Mexico served quite well, played great defense and We had to stay focus right through” said Hoag.

Mexico will match Puerto Rico on Thursday while Canada will have the day off befor facing the winner of Cuba and Dominican Republic.

The Dominican Republic earned its first victory at the Norceca Men’s Continental Championship. The Dominicans who now are 1-1 defeated Saint Lucia 3-0 (25-19, 25-12, 25-23). Last set was a challenge for the team coached by Osiel Vazquez, after Saint Lucia had a shor advantage.

However, Elvis Contreras tallied 15 points, while José Miguel Cáceres scored 9 points for the Dominican cause. For Saint Lucia, Joseph Clercent finished with 10.

Puerto Rico clinched a spot in the quarterfinals of the NORCECA Men’s Continental Championship with a straight-set (25-10, 25-17, 25-20) victory over Bahamas on Wednesday.

Roberto Muñiz finished with 15 points for Puerto Rico while Sequiel Sánchez scored 13 and Ezequiel Cruz added 10. For Bahamas, captain Prince’Tanique Wilson was the top scorer with 12.

ECH M: Surprise of the quarterfinals – You choose

ECH M: Much to look at in Parken – Cheerleaders and 80 m2 big screen