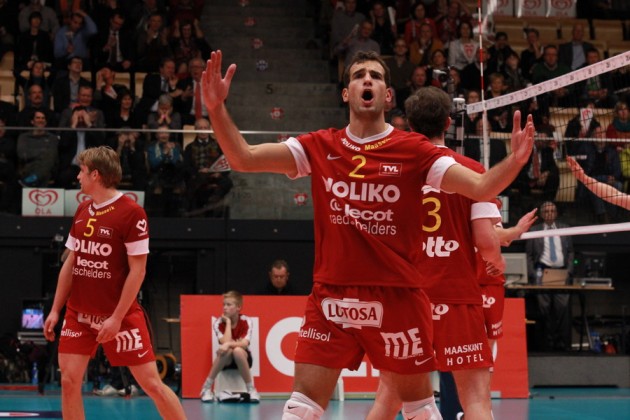 The 27-year old Lorsheijd is actually a very experienced player who moved to Maaseik after spending the past season with France’s TOURCOING Volley.

Lorsheijd was very sport-oriented right from his childhood: “Beside Volleyball I also played tennis and soccer and even practiced judo and water polo” he says. “However, at a certain point I was called to join the Dutch Volleyball Academy and hence focused entirely on this sport. I played my first match in the national league by the time I was only 17. After graduating from high school, I joined the club of Nesselande ROTTERDAM where I spent three seasons” he recalls. “Then I was contacted by TOURCOING Volley where I spent another three years”.

For the 2012/2013 season Lorsheijd was initially contracted by Stade Poitevin POITIERS but this team eventually withdrew from the first division of the national league due to financial problems. “My teammate from the Dutch national team Jelte Maan told me that Noliko MAASEIK was looking for a middle-blocker after Pieter Verhees had left to play in Italy for Andreoli LATINA. I spoke with head coach Brecht Van Kerckhove and we rapidly finalized our partnership” says the Dutch player.

“I am very impressed by the way our training sessions are organized here in Maaseik. They are very diversified and innovative but still we always aim at the maximum” he adds. “I also have to acknowledge the great work by the club. There is a very solid organization, plus a lot of motivated people, a good staff and many volunteers who do their best to support the team. As for the results, we have had a very good season so far as we have finished the prelims of the CEV Volleyball Champions League with six wins and will play Zaksa KEDZIERZYN-KOZLE in the Playoffs 12. This is a real challenge that everyone is looking forward to”.

Noliko is currently ranked second in the national league and has qualified for the semis of the Belgian Cup. “The balanced roster of the team where every player is equal is the real key to our success” stresses Lorsheijd who has played more than 100 matches with the Dutch national team but has decided to take a break from the “Oranjes”. “The group has very good middle-blockers such as Rob Bontje and Wytze Kooistra and I haven’t been playing much lately. This combined with my studies and my young daughter has made me decide to take a break from the team. I am happy to be in Maaseik and want to achieve much success with this group in this season”.