FIN W: Hämeenlinna give up crown to Viesti who claim championship for the 9th time

LP Viesti won the Finnish Women’s Volleyball Championship for the ninth time in the club history as they defeated Hämeenlinnan Lentopallokerho (commonly known as Hämeenlinna) by a 3-0 in the 2018/19 playoff final series. 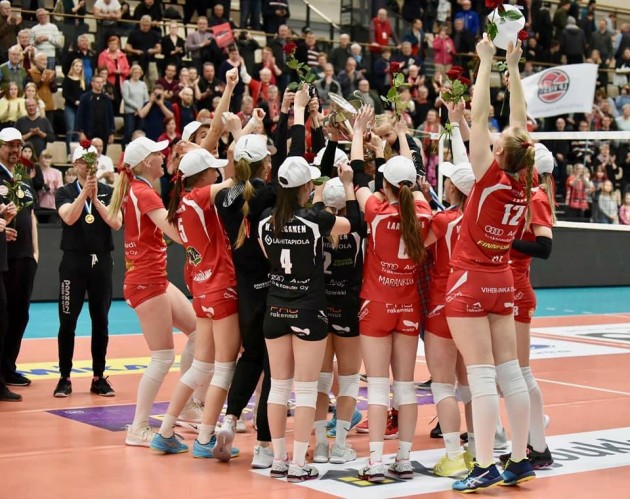 After winning Game 3 of the Mestaruusliiga 2018/2019 playoff finals against Hämeenlinna by a 3-1 (25-23, 25-21, 19-25, 21-25), Viesti retained the Finnish championship after a year as they lost it in the 2017/18 exactly to their rivals in this season’s title matchup. Viesti won two previous games in the series by a 3-2. The Estonian opposite hitter Kertu Laak dominated in Game 3 and in the final series as well. She scored 26 points, including six aces and five kill blocks (out of the team’s 17). French Maëva Orlé top-scored for Hämeenlinna with 21 points.

Working as a coach in Viesti, Tomi Lemminkäinen was involved in winning all nine Finnish championships of which he won five as a head coach, a role that he performs at the moment. Also, there are some players in the club who took part in claiming nearly all of these nine titles such as libero and also a captain Hillaelina Hämäläinen who won seven.

SLO M: No sensation in Maribor, Kamnik for the fifth time in the final

TUR W: Rahimova without support of teammates, Fenerbahçe through to playoff semifinals