NED M: Orion win title in finals that will be talked about for a long time

Achterhoek Orion captured the Dutch Men’s Volleyball Championship title for the second time in the history. 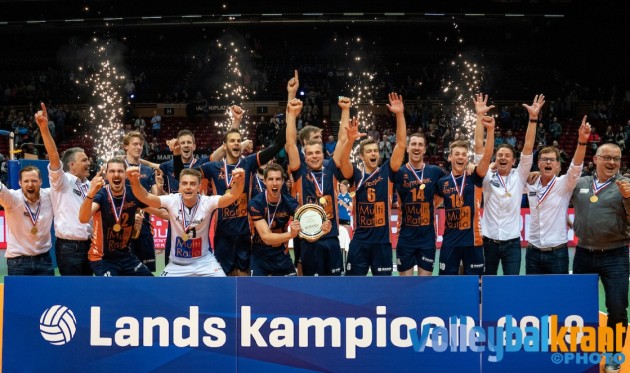 At the end of the third set, it seemed that the fourth consecutive championship title for Lycurgus has arrived. Their fans exploded with joy at the serve of Lycurgus outside hitter Frits van Gestel at 32-31 for their team. It looked like the ball fell on the line and that it was an ace. However, the linesman assessed that it was out of bounds and the umpire accepted it. Lycurgus players protested but it was in vain. The challenge system has not been established in the Dutch top division yet. Including this point, Lycurgus had four more match points which they failed to convert in the set.

Orion took charge for the rest of the match, winning the title at the spike of their opposite hitter Joris Marcelis (34), who announced ending his career before the finals. He was not the only player who decided to retire. Wytze Kooistra, one of the best opposite hitters in the history of the Dutch volleyball, said a farewell to his professional career after winning three consecutive titles with Lycurgus prior to this season’s finals. Kooistra also claimed the CEV Cup with the Italian side Roma Volley, national Cup and Super Cup in Poland (PGE Skra Bełchatów) and League Cup in Greece (Olympiacos S.F.P.) once each. With the Dutch national team, he won the CEV European League twice.