Poland won its first game at the qualifying tournament for the 2013 CEV Youth Volleyball European Championship - boys, that is taking place in Nitra by defeateing Portugal. Ricardo Rocha and Wieslaw Czaja gave statements. Bartosz Bucko and Dinis Alves were the tops scorers. 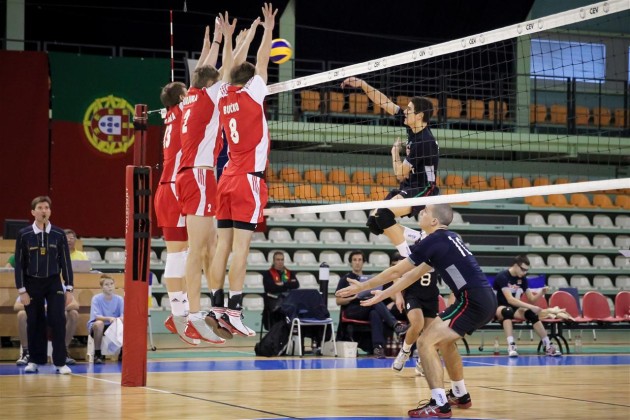 Poland opened the competition by routing Portugal (25-16, 25-21, and 25-14) by imposing its pace and quality in all fundamentals, and especially in blocking, offense and serving. After they did not find much resistance in the opening set, the guys from Poland had to cope with a comeback that Portugal displayed in the second section of the game, clawing back from 15:21 to 21 all. However, Poland could eventually bag the provisional 2:0 after an ace contributed by middle blocker Pawel Gryc sealed the final 25-21.

Poland dominated the scene in set 3 (25-14) to ultimately take three points from its first match in the tournament.

“Their players were stronger, taller and they also served really well” said Portugal’s head coach Ricardo Rocha. “We had problems in reception and made many unforced errors. If you make so many mistakes while playing a team as solid as Poland you won’t stand a chance” he added.

“We are pretty satisfied with the result; our players were nervous which is normal for the start of a tournament. We did not show anything special but I am sure that we can play much better” said Poland’s mentor Wieslaw Czaja.

Bartosz Bucko paced Poland with 8 points while Dinis Alves top scored in the match for Portugal with 11.