On Friday Belgium and Finland claimed their second win in Kecskemét – venue of Pool E – while Hungary eventually lost in five sets to Greece as all these teams are currently fighting to advance to the final round of the 2013 CEV Youth Volleyball European Championship. 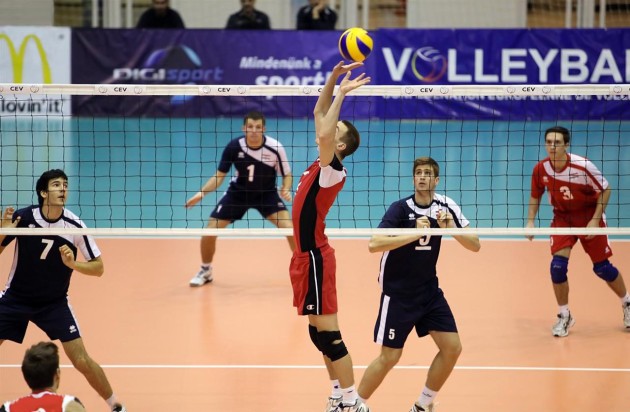 After delivering a splendid performance on Thursday against Denmark, Belgium did shine also on Friday by routing Croatia in straight sets (25-20, 25-16, and 25-17) to stay firmly atop of the charts in the group. Belgium profited of their excellent physical skills and via the contribution provided by Thomas Konings, Lowie Stuer and Arno Van de Velde eventually cruised to a speedy win. Filip Sestan, Croatia’s captain, top scored in the game with 19 points but could not avoid the defeat of his side.

Greece came back from two sets down to finally cruise past the hosts of Hungary (3:2; 19-25, 23-25, 25-21, 25-17, and 16-14) and celebrate its first win in the tournament. Hungary imposed its rhythm and quality in the first set before taking an early lead also in set 2 to keep it until the very end. Norbert Gebhardt and Mate Banai were pacing Hungary’s play but Greece surged back in set 3 where the teams exchanged the lead a few times. After drawing level at 20, the guests remained focused and could call for the provisional 2:1. Motivated by this excellent final rush, the Greeks did play well also in set 4 (25-19) before Hungary caught a terrific start in the tie-break going up 6:0. It looked like the fate of the game was already determined especially as the home side had six match balls (14:8) but Greece incredibly found its way back and by scoring the next eight points could end up jubilant after more than two hours of play.

In the last match of the day Finland edged Denmark in straight sets (25-17, 25-12, and 25-14). The guys mentored by head coach Pertti Valimetsa dominated the scene there from the start until the end, with team captain Sakari Mäkinen, Lauri Jylhä, Samuli Kaislasalo and Karri Kutinlahti mostly contributing to this classy performance.