The traditional “Novotel Cup” got started on Friday. Norway edged England in straight sets. Luxembourg got to play Scotland for their first match. You can read all relevant news from volleyball world on Worldofvolley.com. 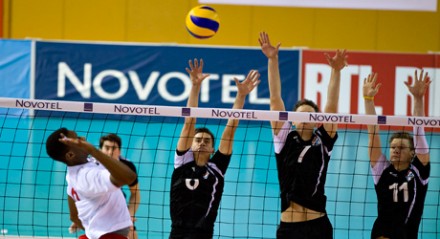 The program of what is already the XXVI edition of the “Novotel Cup” was opened by the clash whereby Norway edged England in straight sets (26-24, 25-19, and 25-22) after 79 minutes of play. England had set the pace of the game almost all the way through in the first set but after missing out on the opportunity to bring it home, the ladies from Norway asserted their supremacy gradually but confidently widening an early lead to finish it off in straight sets.

The home heroines of Luxembourg got to play Scotland for their first match and head coach Detlev Schönberg opted for his usual starting six with wing spikers Nathalie Braas and Annalena Mach, opposite Betty Hoffmann, setter Martine Emeringer and middle blockers Corinne Steinbach and Fabienne Welsch, plus libero Maryse Welsch. After a close start, Luxembourg opened the gap as Braas and Hoffmann were standing behind the serving line and another six consecutive serves by Mach paved the way for the final 25-18. Luxembourg started out strong also in set 2 (4:0) and had a margin of ten by the second technical time-out, so the “Lionesses” could quickly pocket the 25-14 that sealed the provisional 2:0 on the scoreboard. With 450 fans in attendance, Luxembourg did not show any mercy for Scotland in set 3 and wrapped it up at 25-15 for its first win of the year.

The men’s tournament was opened by Norway easily downing a Czech team playing under the denomination of “West Bohemia”. Norway quickly imposed its tempo going for a massive 25-6 in the first set and even though the Czechs stepped up a bit later in the game, Norway’s straight win was never in danger (25-18 and 25-19).

The home heroes of Luxembourg played England for their first match of the New Year and they did emulate their compatriots by scoring a speedy win in straight sets (25-20, 25-22, and 25-19). With Gilles Braas as setter, wing spikers Frantisek Vosahlo and Tim Laevaert, opposite Arnaud Maroldt, middle blockers Ralf Lentz and Jan Lux plus Dominik Husi as libero included in the starting six, Luxembourg gradually widened its lead in the first set going for a comfortable 25-20. Head coach Burkhard Disch replaced Laevaert and Vosahlo with Andy Koenig and Kamil Rychlicki in set 2 and 3, but after having to come from behind in the early phases of the second set, Luxembourg did no longer lose control of the operations pocketing a well-deserved win to the delight of 500 fans.

On Saturday the tournament will continue with Norway playing Scotland and Luxembourg testing out the likes of England in the women’s competition, while the local heroes will play Norway and West Bohemia take on England for the men’s division.

Small breaks at work can prevent back pain