Turkey and Austria are the sole teams with an immaculate record of three wins in as many matches and have hence laid down the right foundations for qualifying to the final round of the 2013 CEV Youth Volleyball European Championship. Read the latest news from volleyball world on worldofvolley.com. 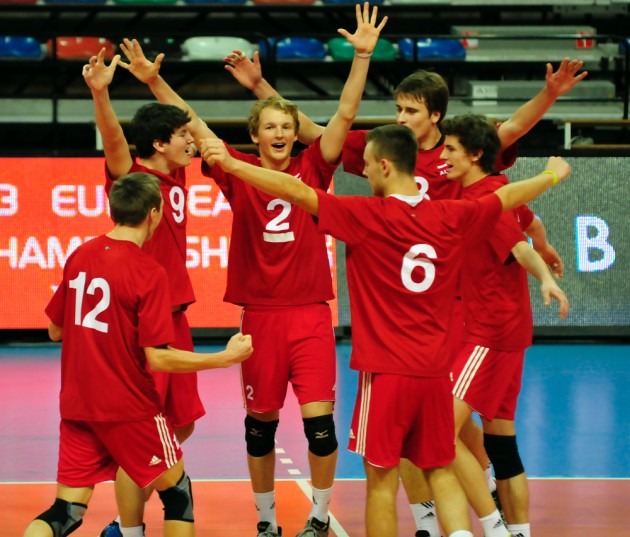 After edging Lithuania and Romania, Turkey got past the Netherlands but the home heroes had to come back from two sets down (24-26, 22-25, 25-12, 25-13, and 15-11) before eventually scoring their third consecutive win in the group. The “Oranjes” had indeed caught an excellent start and they were anchored by their captain Hidde Boswinkel to a provisional 2:0 lead. However, as they were supported by some 1’000 fans, the home guys eventually got back on track, claimed set 3 and 4 and then stretched momentum also to the deciding tie-break where they sealed their win at 15-11. Boswinkel top scored in the game with 20 points while Turkey was paced by its opposite Cansin Ebonaifo with 18.

Austria did something similar in the first match of the day coming back also from two sets down and managing to stand three match balls for their opponents from Spain in set 4. Austria flipped the charts around and after claiming that section of the game played superbly to bring it home via the deciding tie-break (28-30, 19-25, 25-23, 29-27, and 15-12). Paul Buchegger topped the charts of the best scorers with 35 points while the 29 scored by Spain’s captain Carlos Jimenez were not enough to contribute another win for his side.

In the other match of the day Romania scored its first win in the competition after losing the opening set to the underdogs from Lithuania (25-27, 25-22, 25-18, and 25-14). After trailing 20:24, Lithuania clawed back down the stretch and could seize the first set before Romania found its best play and could have the upper hand after four sets. Lithuania’s Arnas Rumsevicius was the best scorer in this game with 21 points including 4 blocks and 3 aces.