The negotiations surrounding the status of Kim Yeon-koung (25) who is playing in the Turkish women's volleyball league and pro volleyball club Heungkuk Life (HKL) has fallen through. This and other volleyball news read on Worldofvolley.com. 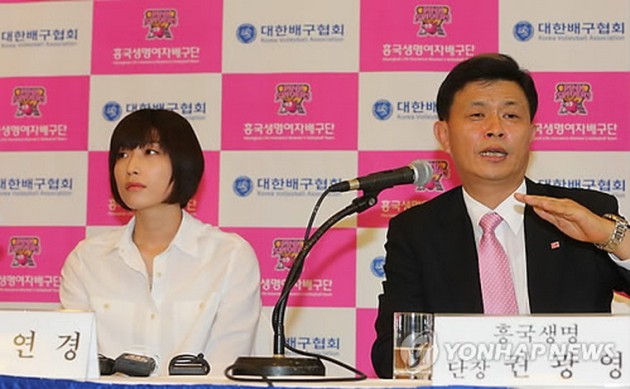 HKL revealed on the 22nd, “We offered two years abroad and returning to Korea after to Kim but she refuse this, and lastly offered even complete transfer but Fenerbahce club denied on the basis of not suitable transfer fee”.

HKL’s General Manager Kwon personally sent to Turkey on the 18th and tried to negotiate with Kim but was not able to bring the interests closer.

HKL explained that Fenerbahce expressed in Europe there is no Posting practice like that of Korea, refusing the transfer fee for complete transfer, standing firm of around 5-7% of the salary resulting in a non agreement.

On the 8th of this month, Kim sent an email to HKL, KVA and KOVO expressing “the original contract with Fenerbahce needs to be honored” and “I want to continue playing as an international FA.”

After that on the 16th, she requested “The transfer agreement with HKL needs to be written with basis that the existing contract with Fenerbahce will be maintained and will terminate June 10th of this year.”

The negotiation on the edge between HKL and Kim was not able to be resolved and with that the agreement made by the government and the Sports associates back in October that allowed Kim to go abroad may also be in danger of becoming annulled.

Kim and HKL have been in conflict regarding the athlete’s foreign transfer after the London Olympics.

Kim‘s stance of wanting to play in a bigger stage and the club’s stance of not recognizing an athlete without FA status putting forward an agent to independently sign with a foreign club has run a parallel.

This problem was talked about even in the parliamentary inspection, showing signs of turning political, the government and the Sports associates opened the way for Kim to play in Turkey in October 22nd of last year.

The ITC would be issued right away, but there was a condition that within 3 months Kim will sign a transfer contract with Fenerbahce under HKL and the FA regulation would be modified.

Afterwards, Kim went to Turkey directly and started being active, but until the time limit was almost over, the negotiation did not progress at all.

And because of this HKL‘s General Manager went to Turkey personally to attempt to resolve for the last time but fell through.

The second clause of the decision from three months ago was not met.

Kim will be in limbo, not an FA nor a transfer under HKL, and it is unclear whether she will be able to play in the future.

KVA sent an official document to Kim and HKL on the basis of the committee meeting from October of last year making firm that “the above result is not a mediated settlement but rather a decision” and that “if Kim does not agree to this they will not issue 2013-2014 season’s ITC.”

Furthermore, KVA has not consented to a replacement ITC stating her as a player of HKL, so there is possibility that this season’s activities may be on halt.

However, regarding the decision made in October, Kim’s agent Yoon of InspoKorea refuted “At the time of the meeting, the decision was made without the athlete even being present, but Kim agreed.” and that “the notion that she is not trying to negotiate with HKL is trying to blame Kim for the fall through.”

He posed a question, “In the decision, it’s noted if Kim does not agree the ITC will not be issued, but who will take responsibility when HKL does not agree?”

Kim, in the email mentioned above, requested that “if HKL‘s irrational offers are the reason the negotiation cannot happen in the time limit, KVA should take this into consideration and make sure there is no damage.” but it is unknown whether this will be accepted.

Finally, during KOVO‘s committee meeting on the 18th, women’s regulation was not resolved during the FA regulation revision discussions, so this will very likely be unfinished as well.

HKL expressed, “It is regretful that Kim would ignore the decision from an institution that has public credibility and rely on the politicians to satisfy her wishes, wanting special treatment with a ‘persistence will pay off’ attitude” and that “to find a resolution, we will work with the affiliate institutions.”