The 2013 CEV Volleyball Champions League is moving to its most intriguing and exciting stages after the Playoffs 12 were completed this week with a series of world-class fixtures and a few tickets to the next-to-last round being assigned only via the so-called “golden set”. This and other volleyball news read on Worldofvolley.com. 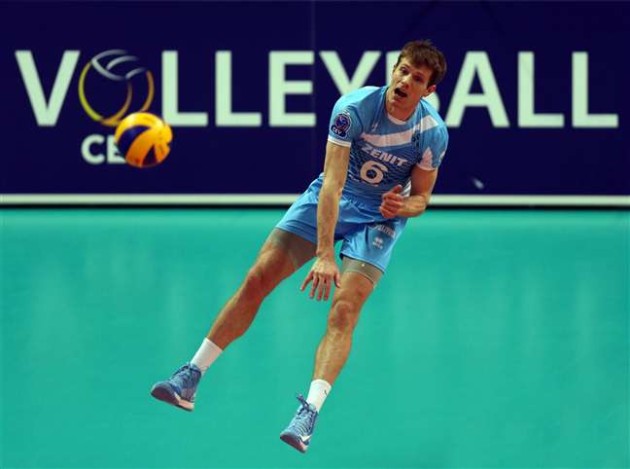 The Playoffs 6 coming up in February – home matches are scheduled for February 5-7 while the return games will be played a week later – will eventually determine the three teams advancing to the final four that is to be hosted by Galatasaray Daikin ISTANBUL (women, March 9-10) and Lokomotiv NOVOSIBIRSK (men, March 16-17).

In the men’s division the Playoffs 6 will be highlighted by a couple of derbies, a sort of family affairs that in Russia and Italy will prolong long-lasting rivalries. Last year’s champions of Zenit KAZAN could best Germany’s sensation BERLIN Recycling Volleys only after two dramatic tie-breaks to cross their ways with their archrivals of Dinamo MOSCOW. Though still sidelined by some injuries, the Muscovites could stop the run of four-time club world champion TRENTINO Diatec via a home win (3:2) and by taking the golden set played in Italy after Kaziyski & Co. had cruised to a straight victory in the return match.

On the other hand, Lube Banca Marche MACERATA and Bre Banca Lannutti CUNEO clearly imposed their quality and supremacy in their respective fixtures with Poland’s Asseco Resovia RZESZOW and ACH Volley LJUBLJANA to contribute that derby the Italian Volleyball fans were waiting for since the DOL for the Playoffs 12.

The last fixture will see Arkas IZMIR get to test the likes of Poland’s Zaksa KEDZIERZYN-KOZLE; after causing quite a surprise this past Wednesday by edging PGE Skra BELCHATOW, the players mentored by Canadian Glenn Hoag will have to best another side from Europe’s Volleyball “Mecca” in order to qualify for the final four for the second consecutive season.

In the women’s competition, the major highlight of the Playoffs 6 will be the Turkish derby that will oppose the likes of Vakifbank ISTANBUL to Eczacibasi VitrA, another star-studded side from Turkey’s megalopolis. These teams have assembled some of the most decorated players of the past decade as their sole goal is to seize the trophy of Europe’s most elitist competition, so this double fixture is supposed to contribute world-class actions and emotions up to the very end. Two Italian-born coaches, Giovanni Guidetti and Lorenzo Micelli, will be crossing their ways thereby prolonging a rivalry that has left its mark also on Turkey’s domestic competitions in the past couple of years.

The vice world champions of Rabita BAKU will also have a very demanding test in the next round as they play Russia’s and last year’s bronze medalist Dinamo KAZAN. Rabita has probably the most cosmopolite roster in the competition – and curiously no player from Azerbaijan – while Ekaterina Gamova – who recently scored 40 points in the derby with Dinamo MOSCOW – will try to anchor the Tatars to their second appearance in the last act of the Champions League.

Azerbaijan has got another representative in the Playoffs 6, namely Azerrail BAKU, whose next opponent will be Italy’s Unendo Yamamay BUSTO ARSIZIO. The winners of last year’s CEV Volleyball Cup will be trying to restore Italy’s supremacy in the competition but it won’t be easy since Azerrail – similarly to Rabita – has signed a bunch of world-class players to fulfill their dream to win the CEV Volleyball Champions League for the first time in history.