Defending champions Costa Rica and Nicaragua won their respective pools to punch direct tickets to the semifinals of the women’s tournament of the X Central American Games. Costa Rica recovered from losing the opening set to defeat Guatemala while Nicaragua saw off Panama in straight sets. 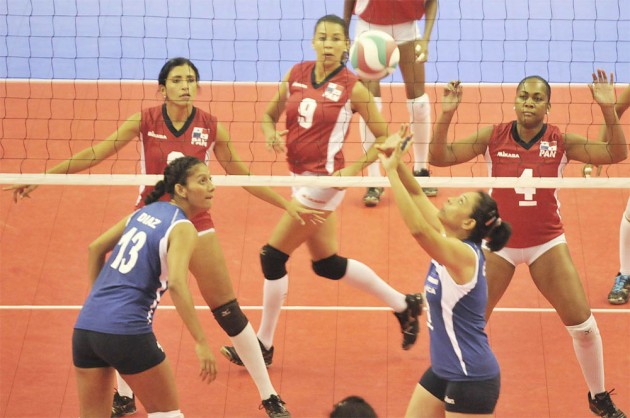 Costa Rica recovered from losing the opening set to defeat Guatemala while Nicaragua saw off Panama in straight sets.

Guatemala will play Panama and Honduras will meet El Salvador in the quarterfinals of Thursday.

Nicaragua booked the ticket to the women’s semifinals with a 3-0 record in Pool B following their victory over Panama in straight sets (25-19, 25-19, 25-23). Hellen Traña topped the winners with 14 points and Maryuri Torres added 10 points. The best scorer for Panama was Joanna Arroyo with 10 points.

“We accomplished our first goal and now we must prepare mentally to reach the final match. Panama battled hard but our experience made the difference and I am very satisfied” said Claudia Noguera of Nicaragua.

Honduras took advantage of 39 unforced opponent errors to score a 3-0 (25-23, 25-17, 25-20) victory over Belize and claim second place in Pool B. Honduran Jennifer Torres had 10 points as the only player with double figures for the winners. Shantel Arnold and Tichele Solis had 15 and 10 points respectively for the losers.

Honduras’ captain, Tessa Flores said “we knew Belize was a difficult team to beat so we committed ourselves to play as best as possible”.

Angela Willis, captain of Costa Rica was sincere by saying they began the match too relaxed and “it caused the team to make unforced errors while Guatemala definitely studied us well”.

CEV CL M: Volleyball at its very best in Omsk!