Colombia defeated Cuba 3-1 (25-16, 25-21, 27-29, 25-13) and advanced to the semifinals of the Women's U-20 Pan American Cup that concludes on Saturday at Coliseo Ciudad Deportiva. Top scorers were Maria Martinez, Danna Escobar, Dianna Arrechea. Cuba had Meliza Vargas and Sulian Matienzo. 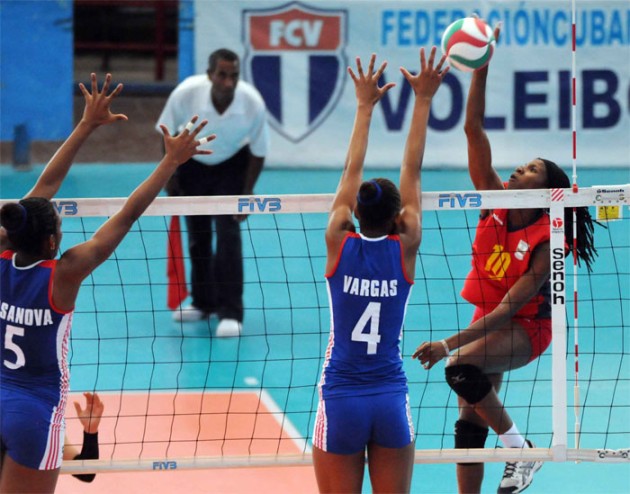 The South Americans, who had superiority in the attack and the serve, were led by Maria Martinez‘s offense with 23 points, escorted by Danna Escobar (18) and Dianna Arrechea (11). Cuba had youngster Meliza Vargas, of only 13 years-old, as their top scorer with 22 points and Sulian Matienzo with 10.

In the second set, Cuba’s coach sent to the court his younger players due to the ineffectiveness of the junior players.

“Actually my team took advantage of the presence of younger rivals, but I agree with the Cuban coach that we have to go with those with better projections,” said Mauro Marasciulo, the Brazilian coach of Colombia. “I’m happy with the win but we have to grow for the world championship because they all get there well prepared and tomorrow’s game against Dominican Republic will help us a lot.“

Cuba’s coach, Tomás Fernández, highlighted the intense play of Colombia. “My team was not able to recover from yesterday’s defeat to Puerto Rico and the loss of the ticket to the world, but have had a hard time for them to understand the strategy against each opponent, because they are very young.“

Arrechea, the captain of Colombia, showed the joy for moving to the next round. “That’s one of our goals, to seek medals, but also to reach the championship in Czech Republic in good shape.“

Meanwhile Vargas said that although they could not win, recognizes the efforts of her and her teammates to take the team forward. “We made a great effort and at least we won the third set.“