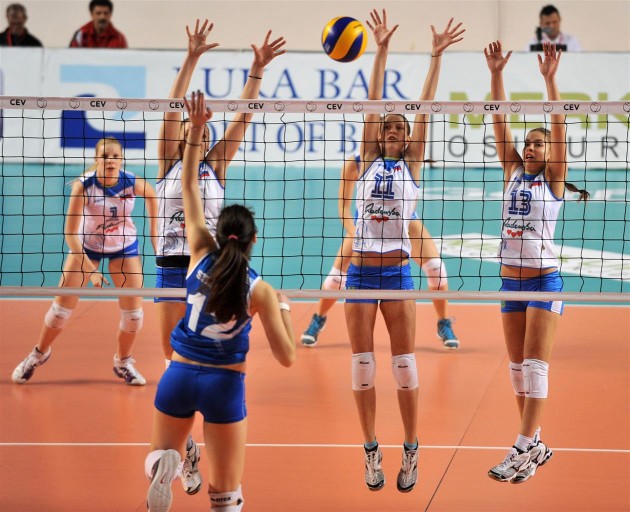 Outstanding player of the match was Greece’s Anthi Vasilantonaki with 30 points.

Led by top scorer Vasilantonaki, Greece started with determination in the first set, while skipper Lana Scuka opened the account for Slovenia. Greek Vasilantonaki, Olga Strantzali and Ioanna Gkountimenko contributed enough points to keep pressure over Slovenia and helped Greece lead 8-5 and 16-12 at the technical breaks. Scuka and Nika Markovic popped up on the wings to score some sizzling shots, boosting Slovenia to come closer at 20-21. At 23-20, however, Vasilantonaki placed a well-timed shot in the middle of Slovenia’s court to give Greece three set points. Sara Dukic saved one with a quick combination at the right flank but then served the Mikasa into the net to offer Greece a well-deserved 1:0 set lead.

A 5-0 run in the middle of the second set helped Greece to keep control of the match. The Slovenian receivers experienced major difficulties with ball control. Head coach Joze Casar sent in second setter Tina Korosec but couldn’t stop the Greek winning streak. Alexandra Psoma sealed the set at 25-17 with a longline winner from the left.

The match stayed tense as it was tied several times until late in the third set. Greece had a match ball at 24-23 but couldn’t conclude. Au contraire, Slovenia’s Anita Sobocan reeled off the last two points to pull one set back at 26-24.

Slovenia kept the fourth set under control. Even though the upcoming Greek stars came from behind to reduce the gap to one point at 15-16, a 3-0 run restored order for Slovenia at 19-15. To thunderous applause from the energetic Slovenian supporters, Sobocan hammered the Mikasa down at 25-17, pulling the match into decisive tie breaker.

The decisive set was hotly contested in the beginning, with the Greek side taking an upper hand first and leading 8-4 after a Psoma block on Katja Mihevic. Another Psoma block caused chaos in the back court of Slovenia, sending Greece to 11-6 ahead while Vasilantonaki climbed well on the right to close out the match at 15-10.

Greece head coach Dimitrios Floros: “I can’t explain how we found the power to win the fifth set. My players are just amazing.”

Greece player Alexandra Psoma: “We played on a very high level today. At the end, we were much focused and pulled through with strong serves.”

Slovenia captain Eva Mori: “We couldn’t find our habitual rhythm and missed some fire today. It was a very long tournament.”