Unilever is the Superliga champion! In the final Unilever defeated Sollys OSASCO 3:2 after being down 0:2. Fofao got the Viva Volei Trophy, Natalia and Sarah Pavan were the top scorer, Sheilla Castro was the best for Sollys. 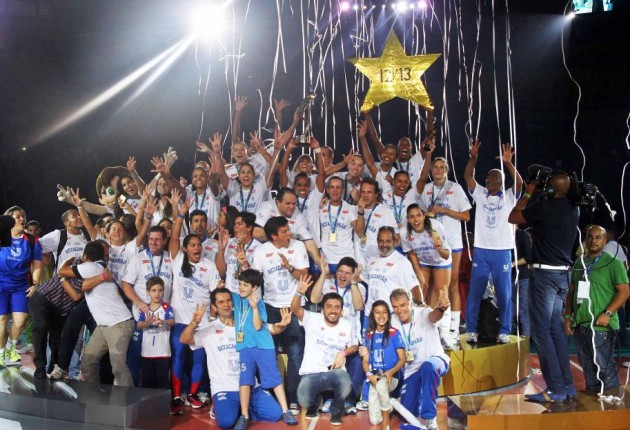 Three players shone in this match, Natalia and Sarah Pavan had 22 points, Fofao played with pain in her right calf but led the group and got the Viva Volei Trophy. Sheilla Castro was the best in Sollys with 17 points.

Coach Bernardinho commented the success: “The first set was tough, but in the second they dominated and we also made mistakes. Then we started to play, we put tactics ahead. We put pressure on them and they started missing. And the pressure was very important to get the win. Tactical play is the only way to defeat a great team like OSASCO. The team has to be congratulated. They worked for it and, even with the absence of a major player like Logan Tom, the group prevailed. Sometimes we think too much about the individuals. They worked hard and deserved to win.“

Fabi also shared her thoughts: “The game sold out very fast and is very nice to see the recognition for volleyball. This was a fantastic game, it ensured us the title and our team is to be congratulated. It is a warrior group and I think that heart has prevailed over the tactical part at times.“

Gabi, only 18 celebrated the result in her first Superliga final: “We worked hard to get to this point, but I did not imagine it would be so beautiful. The team was very base of overcoming. We played much stronger and that was the difference to get the win. We knew they were the favorites, but we came out with our hearts and it was very positive.“