With the Technical Meeting taking place on Thursday evening in Belgrade, everything in the Serbian capital is now ready for the battles in Final Round Pool II of the 2013 CEV Youth Volleyball European Championship - Boys to get under way. This and other volleyball news read on Worldofvolley.com. 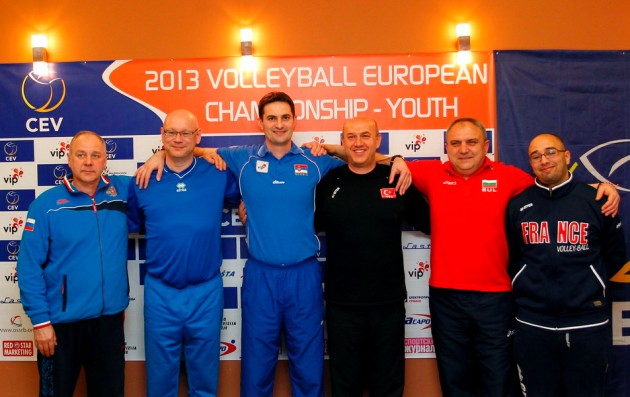 Mr. Aloys Fischer, Jury Secretary of the championship, was in charge of the final get-together at hotel Srbija on the day before the official start of the competition.

The national teams of Turkey and Russia will jump-start the action as these two sides, considered among the pre-favorites for continental honors, will be the first to take on the court at Šumice sports center at 15:00 CET on Friday afternoon in an attempt to establish early control over the standings in the pool.  Bulgaria and France will follow soon after, at 17:30, while host team Serbia will entertain Finland, starting at 20:00.  Competition in Pool I taking place in the town of Laktaši in neighboring Bosnia and Herzegovina is to start 24 hours later, on Saturday afternoon.

The coaches of the six participants in Belgrade shared some of their thoughts and expectation before the launch of the continental championship.

Ali Kazım Hidayetoğlu, head coach of Turkey: “I hope we will continue to grow every year. Our youth girls are very successful and I hope we can repeat some of their accomplishments.”

Alexander Karikov, head coach of Russia: ”Tomorrow is the first day of the competition and we take it step by step.  After tomorrow we will think about other matches. In general, I expect a good tournament.“

Ivan Halachev, head coach of Bulgaria: “We have a good tradition with youth categories of players. I hope we will show some good games, because I know my team is capable of performing well.”

Slimane Belmadi, head coach of France: ”It is important to be ambitious. This is a very big competition and there are some very good teams here like Russia, Serbia, Bulgaria. We will certainly try to win as many matches as we can.”

Milivoje Radisavljević, assistant coach of Serbia: ”We are the reigning world and European champions. The boys are aware of that. But we must know that this is a new generation of players and you cannot always be on top. Realistically, I think we can qualify for the World Championship. As for the medals, I cannot make any promises.“

Pertti Honkanen, head coach of Finland: ”It is already good to be here, but I am waiting for the guys to step up, and maybe go even further than this.“