Finland fought back from 1:2 in sets to eventually edge Croatia at the tie-break on the 2013 FIVB Volleyball Men's U21 World Championship - European Qualification tournament. Leo Andrić, Marko Sedlacek, Tommi Siirilä and Elviss Krastins were the top scorers. 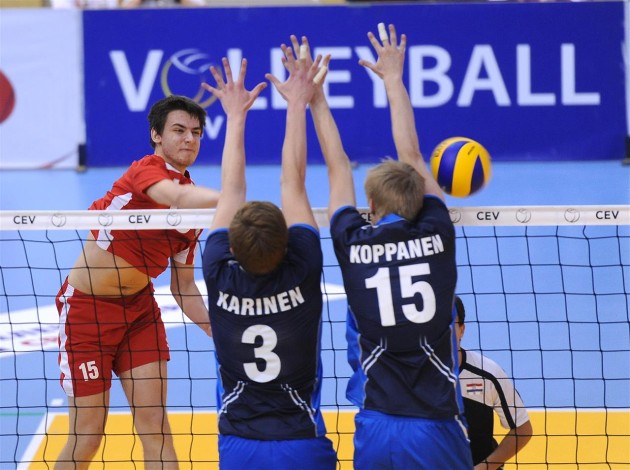 Finland followed up later in the afternoon by claiming a 3:2 win (30-28, 18-25, 13-25, 25-15, and 15-11) in their opening match with Croatia. Leo Andrić paced Croatia in their losing effort with 29 points, including 4 blocks, while Marko Sedlacek added 18 – with 5 blocks – to Croatia’s count. On the other side of the net Tommi Siirilä and Elviss Krastins were the most prolific scorers for Finland with 19 and 18 points respectively. The game was attended by Serbia’s Secretary for Sports, Mr. Predrag Perunicic, and by Zoran Todorovic, the Lord Mayor of Arilje, i.e. the city that is hosting the competition.

Croatia dictated the pace of the game for most of the first set before Finland eventually went to the front by claiming its first set ball by the score of 25:24. Croatia did not give in and a neck-to-neck race unfolded until Finland shaped up the final 30-28 for the provisional 1:0 in sets.

Croatia stepped up the quality of their game right from the start of the second set imposing their rhythm and never looking back for a 25-18 that was followed by an even more impressive 25-13 in set 3. The score remained very close in the fourth set though Finland enjoyed a very slim margin. The Finns broke away by the second technical time-out (16:11) and with Croatia able to score only four more points, they could call for the tie-break (25-15). Finland was the dominant side there as well bringing it home at 15-11 thereby pocketing two points while Croatia got one for that 2:3 defeat.

“We had a lot of problems with our timing in offense. Our setter did not connect well with our attackers while Croatia played really good today” Finland’s mentor Pekka Lahtinen said. “We had to use many of our second lines in this match as we were looking for the right line-up. In the end we were able to win and this is what really matters.”

“We fell behind in the second set and it was very difficult to come back. We were looking for the right tempo in this game and we struggled in attack. We have to play a lot better in the coming matches to stand a chance to make it to the World Champs” Finland’s team captain Mauri Kurppa added.

“We were not ready to play such a long game and lost rhythm and energy after the third set” Milorad Krunic, Croatia’s head coach, stressed. “This shows that we did not prepare good enough for this tournament as my guys are not in shape to play such an exhausting match. However, though everyone expected the Finns to rout us in straight sets, we have showed our potential. We have improved significantly and hope we can continue to grow.“

Leo Andrić, Croatia’s opposite player: “We came here as the underdogs of the tournament. We were underestimated, but we did our best and showed that we can battle with these teams. We had our chances in this match, but we are happy with the point we could get. Maybe we were a little bit tired and we lacked practice, so as the tournament progresses I think we will play better.“