Samantha Mann led four players with double-figures in scoring as St Lucia overcame a first set loss to secure a hard fought four-sets win over Belize (24-26, 25-18, 26-24, 25-17) in their second match of the 2014 FIVB Women’s World Championship NORCECA second round Group J qualifiers. This and other volleyball news read on Worldofvolley.com. 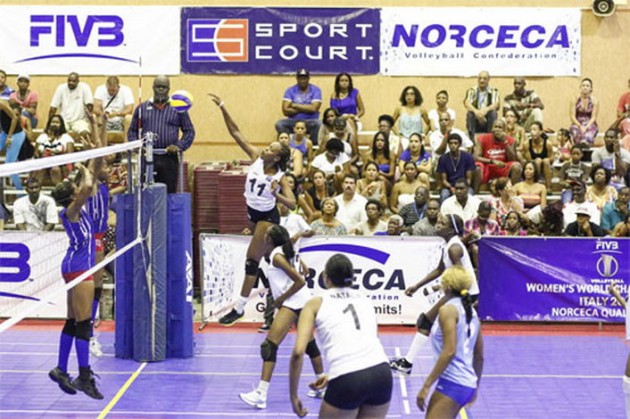 Losers of its first match against host Curacao in three straight sets, St Lucia needed a better start against the Central Americans who had a surprise four-set win over Antigua & Barbuda in their opener on Saturday morning.

For St Lucia, which bettered its rival in spikes 45-39 and blocks 9-7, Mann tallied 15 points, punctuated by five blocks, Dania Hamilton got 14 points (three aces), while Latoya Edward and captain Natalie Edward chipped in with 13 points each in the victory which came in one hour, 40 minutes.

Belize, which had a chance to clinch a top two finish with a victory, got a match and tournament high 20 points from Tichele Solis, 17, while captain Sherylee Young-Thornton added 13 and Shantell Arnold, ten in the loss.

The win saw St Lucia improved to a 1-1 record, the same as Belize, but on four points, one behind its opponents.

Natalie Edward, leader of the winning St Lucia squad was quick to state that this was by far a better showing from her team than in its opener against Curacao.

However, despite the victory Edward noted that there were still some areas her team needed to work on to win the competition, like its reception game.

With regards to its final round-robin match with its ECVA rivals Antigua & Barbuda, Edward said both teams know each other well and for her team to win it will need to play its own game and not worry about the opponent.

Speaking after the defeat Belize captain, Young-Thornton said her team did not make good use of its start.

“We made a good start to the match by winning the first set, but then our game fell apart and we continuously made errors on our passing and serving game.”

Looking ahead to its final round-robin match against Curacao in which it must at least stretch the match to five sets to earn valuable points, if it don’t get the outright win , Young-Thornton said her team has to show up with a better performance.

“We need to work on limiting our errors, serve much better than we did in this match and play with all our hearts,” said Young-Thornton.

Florian Combie, coach of St Lucia first saluted the efforts of Belize whom he described as worthy opponents.

He added, “They (Belize) provided me with a chance to see what kind of resolve my team had and in the end we showed great fight.”

“Overall, we only began to play the way I expect us to play in the fourth set as before that we had to come from behind always.”

“In the end we were able to pull off the win but I’m still waiting on our attack to show up at this tournament”, ended Combie.

Allan Sharp, Belize’s coach said he felt the match against St Lucia was the match of the tournament so far.

“We entered the match as if we were playing a final, because we knew it was critical to both teams to get a win in this match, and while both teams were even after the first two sets, our players made too many mistakes from there on.”

“Our tactical game was off and we had too many service errors which in the end cost us the match.”