Turkey won the last two sets to defeat Canada 21-25, 25-19, 17-25, 25-15, 17-15 on Saturday in the third and final match of a three-match series between the two countries in men’s volleyball. This and other volleyball news read on Worldofvolley.com. 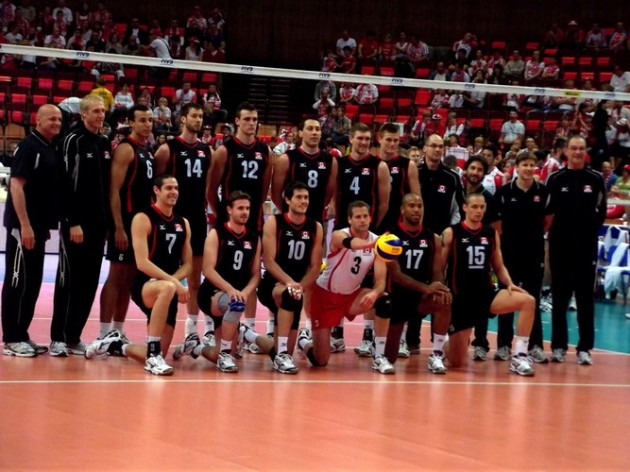 The Canadians, preparing for the FIVB World League tournament which starts May 31 against the Netherlands in Quebec City, had won the opening two matches earlier this week at the National Training Centre in Gatineau, Que.

Gavin Schmitt of Saskatoon led the Canadian attack with 16 points while Dallas Soonias of Red Deer, Alta., and Rudy Verhoeff of Calgary added seven apiece.  Head coach Glenn Hoag continued to provide court time to most of the players as he evaluates for the World League.

Steve Brinkman of Bowmanville, Ont., a veteran of more than 200 international matches, is excited about this upcoming season with Team Canada.

“It’s better than ever,” said Brinkman, who won a league title with his pro team in China this past winter which also included Team Canada captain Fred Winters.  “This is a team that is on the rise.  The more we play, the better we get and playing in World League is going to help us even more towards our ultimate goal of qualifying for the 2016 Olympics.”

Adam Kaminski of Chatham, Ont., who spent the winter playing pro in the Czech Republic is also confident Canada will have plenty of success in 2013.

“We have a good summer of us,” said Kaminsky. “We have a great mix of veterans and youngsters and we can certainly help each other out.  For the veterans one of our biggest roles is to bring stability.”

In the World League, Canada will play the Netherlands on May 31-June 1 in Quebec City then travel to Mississauga, Ont., for matches June 7-8 against Portugal and June 14-15 against South Korea.

Canada travels to Finland for matches June 28-29 and Japan July 6-7 to conclude its preliminary round schedule.