The run for making it to the 2014 FIVB Women’s Volleyball World Championship got officially started on Thursday as Switzerland – returning to that arena after 12 years – opened the program of the first-round qualifier taking place in Kortrijk by edging Portugal with the score of 3:1. This and other volleyball news read on Worldofvolley.com. 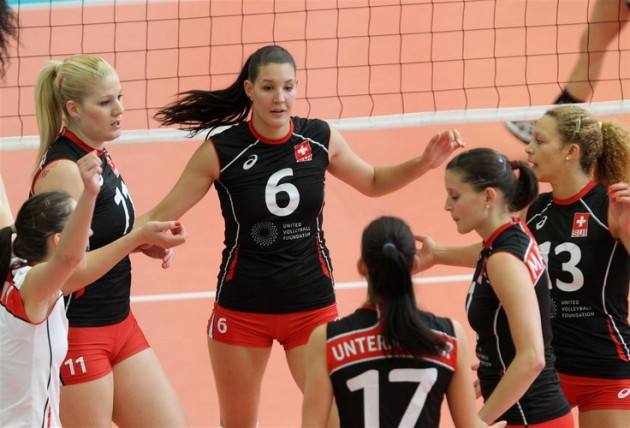 This game was very much likely to determine the closest competitor for hosts Belgium on their way to first place in the Pool which secures a ticket to the third qualification round scheduled for early January 2014.

Portugal’s head coach Fernando Sousa had stressed beforehand that this was the key game for his side and even though the young Portuguese ladies played courageously and did even seize the opening set (29-27), it was Switzerland in the end that could celebrate a close 3:1 win. Portugal had resisted to four set balls for the Swiss in the opening set before sealing the 29-27 that meant a provisional 1:0 lead in the game.

“We started out very nervous” Swiss mentor Svetlana Ilic says. “Since we feel the importance of making it at least to the second round there was much pressure on our shoulders while I have to stress that Portugal is technically very strong and have to address my congratulations for their good performance” she continues.

Portugal set the tone of the game for most of the opening set well paced by their 176 cm tall middle-blocker Nuria Lopes da Silva who finished the game by topping the charts of all scorers with 18 points. Lopes da Silva who plays in Spain for CAV MURCIA showed impressive jumping power and great actions at the net. After Switzerland had drawn level at 19 all, the game turned into a real drama with Lopes da Silva and Joana Polido helping Portugal bring it home for the final 29-27. However, in the next three sets, though playing with glowing hearts, the Portuguese girls made many mistakes and this helped Switzerland cruise to the final 3:1 win. “This is sport but I am very proud of my players” the Portuguese coach said in the end.

“We have been together for only one and a half week and therefore I am pleased we have already achieved a pretty good level” Ilic summed up after the game. “I wonder if this will be enough to beat Belgium” concluded the mentor of Dinamo MOSCOW who some years ago worked as assistant coach for the Belgian national team.

NED W: Slöetjes not sure if she’ll...