The China International Men’s Volleyball Tournament concluded its first phase yesterday in Luohe with China ranking first and Kazakhstan, India and Henan following in that order. Xie Guochen and team manager of India commented the game. 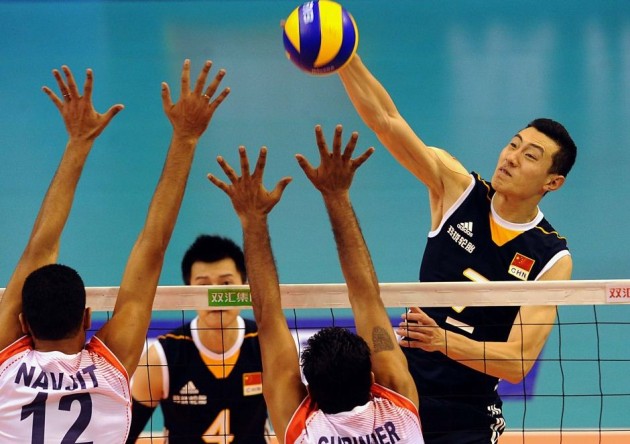 The China men’s national team, led by new head coach, Xie Guochen, clinched its first win in the championship after defeating India 3-1 (20-25, 26-24, 25-20, 25-18) on the final day. China had a relatively slow start to the first set in their match against India, and lagging behind eight points with a score of 14-22 after a 5-5 tie. Coach Xie called a tactical timeout and substituted three players aiming to enhance the blocking, which took effect immediately but this was not enough to win the first set.

The second set was the turning point of the match, with both teams playing strongly with the score going from a  4-4 tie to a 24-24 tie. Blocking once again became a lethal weapon and helped China win the set with a score of 26-24.

From the third set on, China completely took the game mode winning two sets in a row and consequently the match

“Though we won, I am not very satisfied with the process. We prepared some tactics, but I did not see it in the first set. And our setting still requires a great deal of improvement,” Xie commented after the match.

“We came here for practice. So the result is not important for us and I am satisfied with my players,” said the team manager of India.

These four teams will move to Luoyang City (Henan Province) today to prepare for the second phase, which will be staged from May 26 to 28.