Slovenia is on top of Pool B with six points after scoring its second victory in the 2014 FIVB Men’s World Championship qualification tournament taking place this weekend in Ljubljana. The home guys powered past Hungary in straight sets while Moldova – after causing a sensation on Friday by beating Hungary – had to admit defeat to Israel 1:3 in the second match of the day. 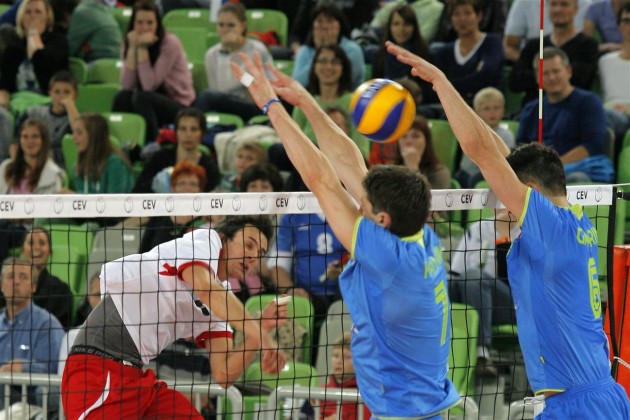 The home team scored another important victory in its quest to make it into the third-round of the European qualification for the 2014 FIVB Men’s Volleyball World Championship. Head coach Luka Slabe made only one change compared to yesterday’s game with Israel by replacing setter Gregor Ropret with Dejan Vinčić. The beginning of the match wasn’t very promising as Hungary led until 11:12, when Klemen Čebulj scored an ace to level the score. Slovenia played better from then on and won the first set 25-20. The Hungarians started the second set better than the hosts as well, although Slovenia led at the first technical time-out (8:7). After that the team led by head coach György Demeter went up 10:12, and Slovenia managed to catch up at 14:14. From then on the home team dictated the pace and eventually seized the second set 25-20. The Slovenians started the third set with real determination and built up a 7:1 lead through great serves by Dejan Vinčić and good blocking by Matevž Kamnik. Slovenia continued to push hard and led 16:9 at the second technical time-out, which was enough to bring the match safely to an end at 25-17. Head coach Luka Slabe was satisfied with the team’s performance, and praised the players for their patient game. However, he is already looking towards the third match against Moldova on Sunday. The captain of the Hungarian team Szabolcs Nemeth stated his team played better than yesterday, “but this wasn’t enough against the home team, which was better. We want to play better against Israel tomorrow and score a victory”.

In the second match of the day, Moldova followed up on yesterday’s good performance by winning the first set against Israel. The two teams were tied for a long time with Israel leading at the first technical time-out and Moldova being in the front at the second. While Moldova was able to clinch the first set, their performance fell in the second and Israel prevailed 25-21. The Moldovan game fell considerably apart after that. Israel therefore won the third and fourth set relatively easy, with a 25-19 and 25-18. Marin Lescov said Moldova started the match well, but admitted the players felt tired. He nevertheless believes his team has a chance against the home team tomorrow. Alexander Shafranovich, Israeli captain, also stressed this was not an easy match for his team as Moldova started really well. “Moldova made almost no mistakes while we did some stupid mistakes. As the match continued, we put more pressure on them, which provided results”.

Israel will play Hungary on Sunday, while Slovenia will play the surprise of Pool B, Moldova, to complete the program of the tournament and determine the side advancing to the second and third stage of the qualification process.