Though they still have to play Northern Ireland on Sunday, the home guys of Belgium did practically secure already on Saturday their first place in the final charts of Pool D so advancing directly to the third stage of the qualification process for the 2014 FIVB Men’s Volleyball World Championship scheduled for early January. They did so by edging Romania 3:1 in a game where Frank Depestele, Sam Deroo and Bram Van den Dries stood out for the home side. 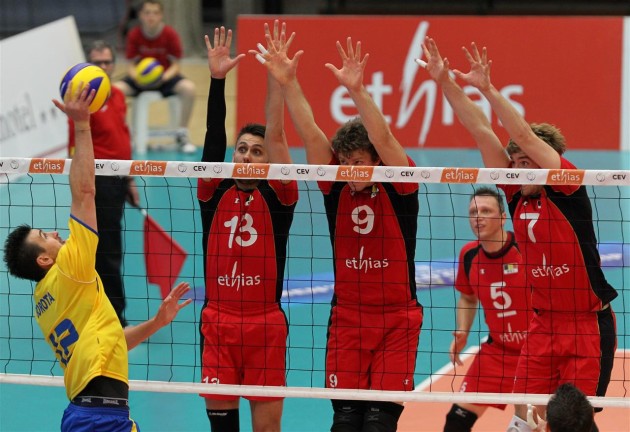 What was some kind of a final match of this tournament was attended by more than 2’100 fans in Kortrijk who contributed a great atmosphere at “Lange Munte” sports hall. The home side started out strong with the float-serves by Simon Van de Voorde, powerful attacks by Kevin Klinkenberg and the excellent combinations displayed by setter Depestele and middle-blocker Pieter Verhees (6:2). Mihai Gheorghita and Dan Borota fought their way back for Romania but Depestele showed off his talent to regularly avoid the Romanian block (20:14). Only Elen Lucian Tofan, Romania’s best player these past days, could keep the rhythm of the home heroes but Belgium finally wrapped it up at 25-18.

Belgium’s head coach Dominique Baeyens stopped the game as his side trailed 0:4 in the second set and it did work as Hendrik Tuerlinckx eventually leveled the score at 10 all. However, Romania went up 16:14 by the second technical time-put powered by Gheorghita and Tofan, before once more Depestele took his side by the hand. Some Belgian mistakes helped Romania move to the front again (21:19) and after a thrilling end – where Tuerlinckx was blocked three times – the guests could go for the provisional 1:1 (22-25).

Romania stretched that momentum to set 3 where Borota and Tofan did shake Belgium’s defense line with their jump serves (11:7); however, Depestele, Verhees and Matthijs Verhanneman were able to get Belgium back on track (12 all and then 16:12); with Van den Dries and Deroo scoring most of the points, the home side could pocket the third set quite comfortably at 25-15.

Belgium opened strong also in set 4 (9:6) but Romania evened the score at 15. Deroo – in excellent shape – and Van den Dries were the ones who paced Belgium in the deciding moments and it was Depestele who scored the last point (25-21) to make sure his side will continue the World Championship via the third qualification round in January while Romania will join the second stage scheduled for October.

In the other match of the day – whose result was nevertheless not going to impact on the final standings of the group – Austria could score their first victory by edging Northern Ireland in three sets (25-18, 25-11, and 25-11). Though the score line looks quite clear, the match was not one-sided as Northern Ireland played courageously to honor their World Championship appearance. Their performance was especially good in the first set where David John Hamilton killed a couple of blocks while Patrick Crooks and Mark Hazley did a good job in attack. However, after going up 12:11, Northern Ireland could not respond to the acceleration impressed by Austria who – with their best players, Thomas Zass and Alexander Berger, on fire – could cruise to the final 25-18. In the second set Austria’s block looked like a terrific wall for the relatively short players from Northern Ireland and the guys mentored by Michael Warm could comfortably pocket that section at 25-11. Northern Ireland showed good defense in the third set but Austria’s serve and block were too much to handle and that paved the way for the final 3:0 (25-11).

WCQ W: Slovakia comes back from two sets down to play Greece for first place