WCQ W: Slovakia comes back from two sets down to play Greece for first place

Slovakia and Greece prolonged their winning streak in their World Championship campaign in Poprad, but the spectators could follow a real drama on Saturday. The home heroines of Slovakia claimed a dramatic five setter against Austria coming back from two sets down and 13:17 in the third. Greece beat Liechtenstein 3-0 to top the provisional charts of the group with six points. Slovakia is second with five. 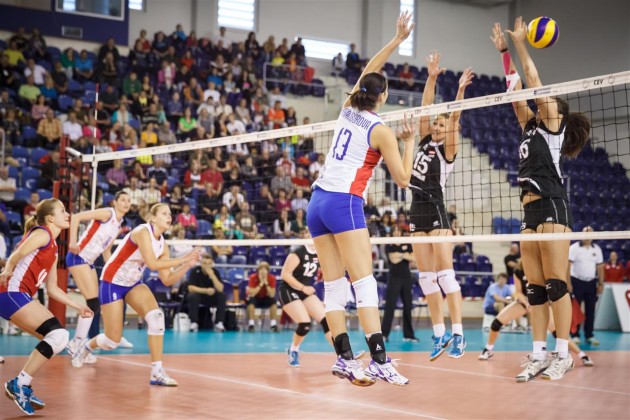 In the opening match Greece edged Liechtenstein as expected in straight sets. Greece dominated the game from the start up to its end and secured at least the second place in Poprad which means the team advances to the second round of the qualification. “We tried to do our job as good as possible and prepare for tomorrow’s match with Slovakia. I am sorry for Liechtenstein, but there is a big difference in our level. Slovakia is the favorite for the last match, but we will do our best” said the head coach of team Greece Ioannis Kalmazidis. “We played better than yesterday. Our reception was about 40 percent and it was really good for us. We have scored 12 points in the second set and we kept our smile all through the match” the assistant coach of team Liechtenstein Swen Mallschützke stresses. Eleni Kiosi was the best scorer for Greece with 17 points, while Claudia Hasler collected 6 points for Liechtenstein.

In the second match more than 700 people got together at Arena Poprad for a real drama. Slovakia was the clear-cut favorite on paper, but the Austrian team started out very well. The team mentored by Slovakian coach Zuzana Tlstovicova played very good in serving and caused a lot of problems to the reception of their opponents. Slovakia played very bad in attack and head coach Miroslav Cada tried to find an ideal line-up. Austria won the first set in great fashion 25-22 and continued to play good also in the second. The women in red jerseys claimed also the second set 25-23 and started causing a sensation. In the third set Austria went up 13:9 when suddenly all the lights in the arena shut down and the teams had to wait for 16 minutes for this technical problem to be solved. Austria was up 17:13 and they were very close to upset the home side. But the Slovakian girls pushed by their great supporters finally turned the match in their favor and sealed a very important win. “We started very bad. We had problems with our serve and also in attack. Our opponent played very good and caused us a lot of problems. I made a lot of changes and finally I could find the ideal line-up. I want to thank my players because they have shown real character and didn’t give up” the head coach of team Slovakia Miroslav Cada said.

“I am sad of course, but on the other side I am proud of my team. I told them to play relaxed and they did. I think we have shown our maximum here against such a strong team like Slovakia” the head coach of team Austria Zuzana Tlstovicova commented. The best scorer for the Slovakian team was Brazilian-born captain Solange Paula Pereira Soares with 16 points while Srna Markovic contributed 24 for Austria.