El Salvador registered a come from behind victory over hosts U.S Virgin Islands to finish atop of the NORCECA Second Round Group K Tournament, a qualifier to the 2014 FIVB Women’s World Championship. Adriana Flores was the only player of the winners who finished with double-figures in the scores with 13 points. Denisse Rogel had 9 while Diana Romero and Gabriela Martinez each had 7. 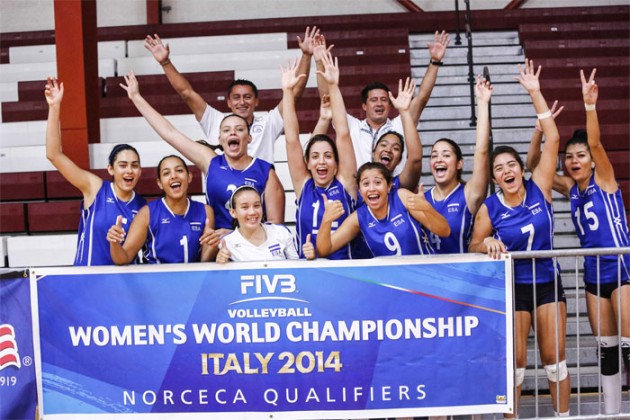 Both teams were already qualified to the third round of NORCECA tournaments to be held early in 2014 which includes five four-team competitions and a playoff to be disputed by the teams who finish second in those events.

Adriana Flores was the only player of the winners who finished with double-figures in the scores with 13 points. Denisse Rogel had 9 while Diana Romero and Gabriela Martinez each had 7. U.S. Virgin Islands’ Valissa Brathwaithe had 26 points followed by Danielle Selkridge and Sacha Gumbs with 19 and 13 respectively.

The winners held an 11-6 difference in aces while the defeated side topped in the blocking category 14-6.

“Our serves were again the difference, especially in the fourth set and during the tie-breaker,” Flores said. “U.S. Virgin Islands was a team very tough to beat.”

“I am very proud of my team,” said Nery Henriquez, the coach of El Salvador. “At the end we were a little more consistent but the victory could have gone either way.”

Gumbs, the captain of the local team, said the Salvadorans had more desire and the match was won by the team that wanted it most.

“Both team had a lot of up and downs during the match but we suffered a mental breakdown and could not overcome it at the end,” Gumbs said. “They wanted to win more than us and they got it.”

WCQ M: Belgian guys round off memorable weekend with another straight win