Teams will be stepping into the unknown at the NORCECA Second Round Group M Tournament, a qualifier to the FIVB 2014 Women’s World Championship, as each of their coaches admitted having very little or zero information about the other competitors as the event is set to serve off on Saturday. 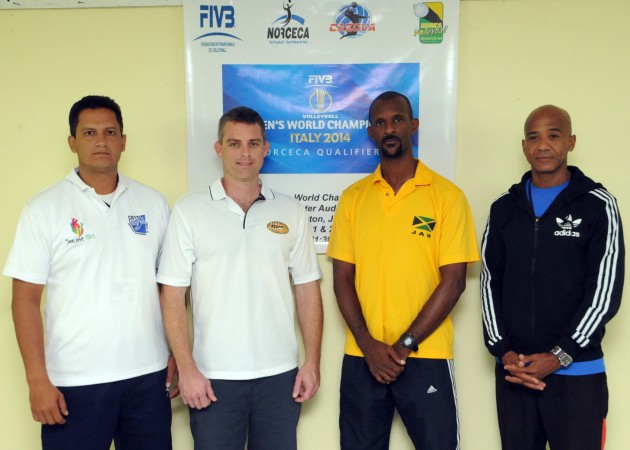 Despite that common factor, all of them expressed confidence on realizing their mission of qualifying to the third round programmed in early of 2014.

Teams of Nicaragua and Jamaica both won their respective first round tournaments in 2012 and are ranked 10th and 12th in NORCECA, respectively. Suriname and Bermuda, third place finishers in their last year’s tournaments are ranked 27th and 32nd.

Saturday’s action kicks off with Nicaragua playing Suriname at 9:30 (local time) followed by Jamaica against Bermuda at 11:30. Teams will come back to play at 18:30 and 20:30.

Here the excerpts of the coaches’ statements:

Gary LeBlanc, Assistant Coach of Bermuda: “We are a mix of talented junior players and seniors who have been with the team for ten years. We have done a lot of training and are looking forward to play with the teams in our group. We’ll start against a strong team like Jamaica and hope to do the best we can.”

Gatasheu Bonner, Coach of Jamaica: “I want to welcome all the competing teams and wish them all the best. Our main goal is to qualify to the third round even though we don’t know much about the other teams. We played Suriname four years ago and that is a long time. However, we do believe in our ability to fight for each point and hopefully playing our best game can take us all the way.”

Rene Quintana, coach of Nicaragua: “We really think about the tournament as a lottery since this is the first time we play against the teams from the Caribbean. We have very little information about them. We come here with the idea of a victory and our principal objective is to qualify to the next stage.”

Eric Aikman, coach of Suriname: “We have prepared well for this tournament. We started a year ago and the girls are highly motivated. We don’t know much about the teams but watched some films of Nicaragua. We hope to play a good tournament and qualify to the next round.”

MVM W: China still in the race for the fifth place