Portugal beat Finland in an extremely close FIVB 2013 World League match on Saturday at Helsinki Ice Hall. After forcing proceedings to a fifth set, the Portuguese won the Pool C fixture 3-2. It was an impressive performance, particularly considering that Finland had won the match between the two sides on Friday in straight sets. 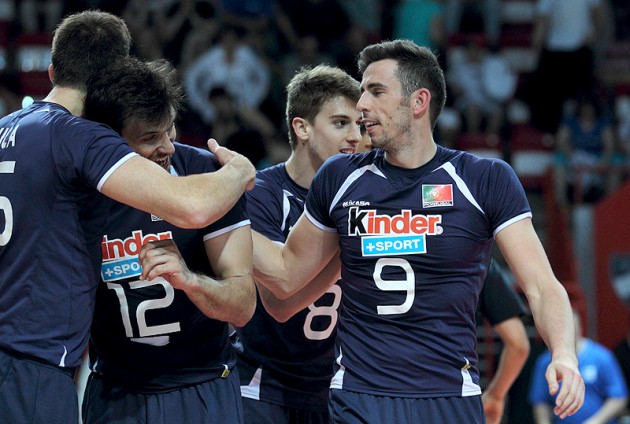 Portugal played much better in the first set than they had on Friday, holding a five point lead at one point, but the Finns managed to steal the set in the closing stages. Konstantin Shumov blocked well, and his decisive spike gave Finland a 25-23 win.

The Portuguese took the driving seat in the second set, leading by four points. Finland again crept back, but Portugal won their first set of the weekend 25-23, partly thanks to the effective spiking of Valdir Sequeira, who got seven point in the set. 1-1.

Portugal led the third set 16-13 at the second technical time out, but inconsistent serving wasted points. The Finns were not blocking at their best, though, and Portugal piled up the spikes to lead 24-19. Finnish substitute Niklas Seppanen hammered winners threetimes via Portuguese blocks, but Alexandre Ferreira tookthe set for Portugal with a great spike. It was another set that ended 25-23.

The fourth set also finished 25-23 – this time to Finland.The Oivanen twins, Mikko and Matti, excelled in the later stages, and a decisive set was forced.

It was a thriller, just like the previous four: the teams tied nine times, but in the end Portugal broke a 12-12deadlock with a smart tip from Andre Reis Lopes. This was followed by a hit from Jose Joao and a block by the excellent Shumov. Portugal took the set 15-12 and clinched the match.

Outside hitter Valdir Sequeira finished with a total of 25 points. Alex Ferreira got 20 points, while for the Finns, Mikko Oivanen was top scorer with 26.

The final points total – 111 to Portugal and 108 to Finland, showed just how evenly matched the teams were.

The result sees Portugal move up to fourth place in Pool C with two points. Finland top the pool with four points. The match was seen by 2,350 spectators.