Last Sunday Slovenia men’s national team scored an important away victory against Croatia in the first leg of the third-round qualifiers for the 2013 CEV Volleyball European Championship scheduled for September 20-29 in Denmark and Poland. The team mentored by head coach Luka Slabe overcame a poor start into the first match as the Croatian guys started well and won the first set in Kastela. 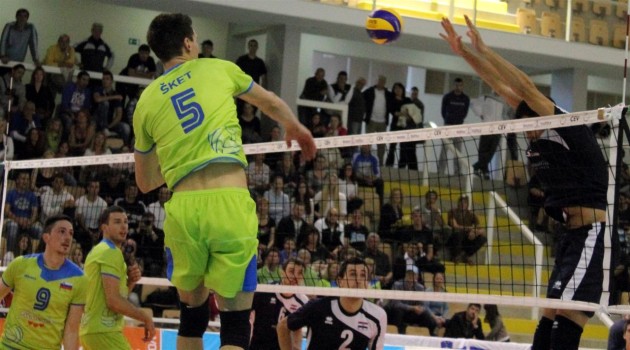 The team mentored by head coach Luka Slabe overcame a poor start into the first match as the Croatian guys started well and won the first set in Kastela. However, after that it was the Slovenians who were more focused and determined and eventually cashed a 3:1 away win. Head coach Luka Slabe nevertheless stresses that the fight isn’t over yet. “We still make too many unforced errors and mistakes in attacking. The most positive thing of the first match was our collective spirit. We didn’t give up when things got tough”.

Despite losing the first match, the Croatian national team doesn’t give up. The Croatian head coach Igor Šimunčić above all hopes that his team will play better than in the first match. “We are prepared and we will try to give our maximum. We above all have to improve our reception and our serving”.

The winner of this double clash – in case Croatia wins a golden set will have to be played – qualifies for the European Championship and will play in Group C in Herning (DEN) together with 2011 European champions Serbia, Finland and the Netherlands.