Guatemala had to fight hard to earn their second victory defeating Guadeloupe 3-0 in the closing match on Saturday at the NORCECA second-round Group L tournament. Rut Gomez was Guatemala’s top scorer with 19 points and Acina Isabelle was Guadeloupe’s best with 11 points. 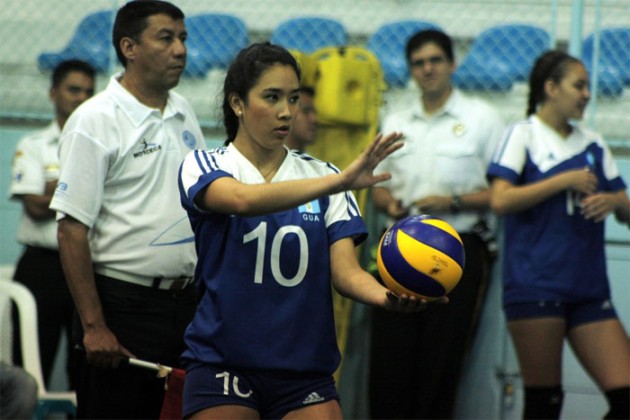 Guadeloupe attacked in every way possible with superiority in blocking by 10-4, but the home girls were able to take control with advantage in spikes 41-24 to remain undefeated andwith a 2-0 win-loss record they book their ticket to next year’s NORCECA third- round tournament.

Rut Gomez was Guatemala’s top scorer with 19 points and Acina Isabelle was Guadeloupe’s best with 11 points.

Guatemala meets Aruba on Sunday morning while Guadeloupe faces St. Kitts & Nevis to complete the preliminary phase of the tournament.

“Their taller blocks hurt us, but we knew how to counterattack with a better strategy, playing united and following our coaches’ instructions. I believe we’ll meet again in the final match” said Diana Arias, Guatemala’s captain.

Isabelle Acina was a little emotional for their loss “It’s hard lose and after having two spectacular sets it’s odd. Guatemala pushed hard and we weren’t able to keep it up in the third set with many faults, but this isn’t finished yet”.

David Aldana, Guatemala’s coach said “We were surprised by Guadeloupe as we saw them a play differently against Aruba. After the substitution of Blanca Recinos due to a minor injury, Andrea Diaz led our victory in the second set. Our strong serves made them lose control. ”

Jean-Louis first wanted to thanks NORCECA for organizing these tournaments, “Without their support we wouldn’t be able to be here”. He also congratulated Guatemala and spoke about his team “My players were afraid to lose in the third set, but there must be a loser and a winner. Guatemala’s served very well making it difficult for us to play.”