Cuba booked a spot in the 2014 Grand Prix defeating hosts Peru 3-1 in a match for the 5-to-8 positions of the Movistar Women’s Volleyball Pan American Cup. Rosanna Giel, Sulian Matienzo, Ana Cleger, Yoana Palacios, Raffaela Camet and Diana Soto were the top scorers. 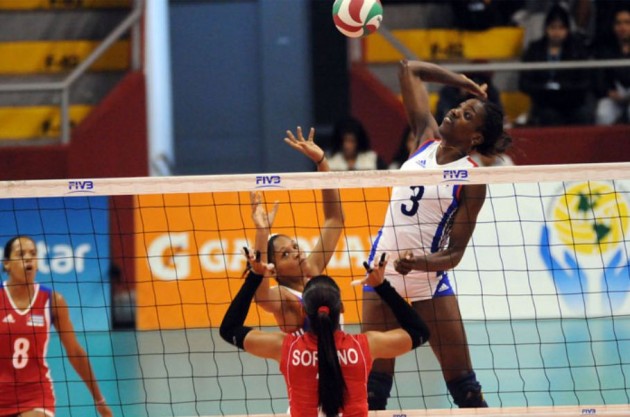 The Cubans now wait for the winner of the match between Puerto Rico and Canada to play for the fifth position.

Rosanna Giel with 20 points led four Cubans with double figures in the scores. Sulian Matienzo had 15 points while Ana Cleger and Yoana Palacios added 13 and 11 respectively. Peru’s Raffaela Camet and Diana Soto each had 10 points in the losing effort.

The Cubans outblocked the Peruvians 18-10 and also topped their rivals 6-3 in service winners.

“We are happy because we achieved our goal of qualifying to the Grand Prix,” said Juan Carlos Gala, the coach of Cuba. “We took advantage of our power in services and were potent against a strong rival like Peru.”

Emily Borrell, the libero of Cuba, said: “We are really happy about qualifying to the Grand Prix. It was a tough match, Peru played well but we took advantage of our powerful serves.”

“Cuba is always a tough opponent but Peru didn’t play focused,” said Sung Hong, the coach of Peru. “I am concerned about the performance of my team.”

Peru’s Captain Mirtha Uribe said they played a good first set “but then we didn’t put pressure on the Cuban defense with our serves and let them to attack freely.”

The Peruvians led from the start of the first set of the match outplaying the Caribbeans in 28 minutes by score of 25-18.

The Morenas del Caribe began the second set making adjustments in their line of blocking and maintained the difference from the first technical time out, winning 25-16 to tie the score at 1-1.

The third set was dominated by Cuba from the start leaving the Peruvian coach without alternatives off the bench, winning 25-15.

In the fourth set, despite the support of the fans, the Peruvian team could not achieve the objective and fell down 25-16.