Belgium completed a clean sweep by scoring a third consecutive win in the first round of play for Pool A of the 2013 CEV Volleyball European League – Men by edging Slovakia in straight sets on Saturday night at Budocenter. Van den Dries, Matthijs Verhanneman, Sam Deroo and Peter Michalovic were the top scorers. 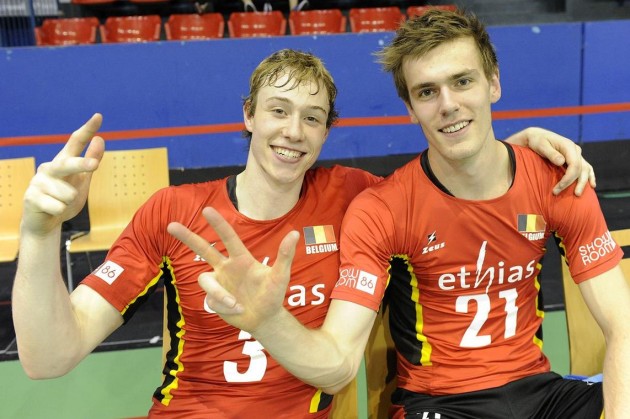 Slovakia could not find a way through Belgium’s blocks, a real wall that pushed the Slovaks to despair. Only in the third set Slovakia did show some resistance but Belgium finished it off after 61 minutes of play cashing their seventh match ball with – quite evidently – a block kill. Slovakia ends the tournament with one win and two defeats, the same feat achieved by Austria and Denmark.

Bram Van den Dries paced Belgium with 13 points while Matthijs Verhanneman and Sam Deroo added 10 and 7 to the count of the winning side. Peter Michalovic was Slovakia’s most prolific scorer with 6.

“Of course three wins bring good feelings and we have no reasons at all to be unhappy at the end of this weekend” says Belgian mentor Dominique Baeyens. “We scored some 15 blocks today and we played tactically very well. We pressured our opponents with our serves. I have been coaching for a long time but I think that our performance in the first set was truly exceptional.”

“Nothing worked today for us as we did not score at all with our side-out” Slovak head coach Stefan Chrtiansky points out. “I do not know if yesterday’s game with Austria was still on my players’ heads. I thought we had reset our minds but probably this was not the case. We go home with three points from this tournament while we had foreseen to take six. We have to get back on track in the next tournament if we want to qualify for the final four.”

ECH W: “We got back into tournament...