Brazil remains undefeated in the 2013 FIVB World League as it escaped Saturday’s match with a 3-0 win against home team Argentina. Lipe Fonteles and Bruno Romanutti were the top scorers. 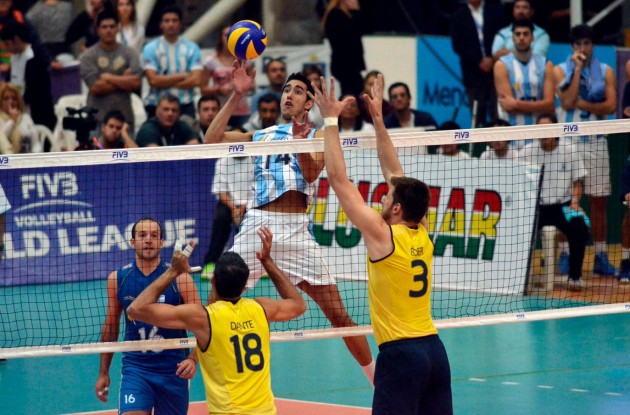 Brazil remains on top of Pool A with 11 points and a 4-0 record, while Argentina has one victory from its 2013 World League debut match against USA.

Lipe Fonteles uncorked 14 points for the winning team, while Bruno Romanutti came from the bench in Argentina to score 12 hits.

Three new faces appeared on the local side for the rematch: Luciano De Cecco, Rodrigo Quiroga and Pablo Crer, while Bernardinho chose Lipe over Lucarelli in Brazil. However, opposite players Vissotto and Castellani were the most prolific ones en-route to the first TTO (6-8). After the break, Eder Carbonera scored with two solid blocks and Lipe did the same to push Brazil away to 7-14. Bruno Romanutti replaced Castellani and renewed the local spirit, and a while later Pablo Crer blocked twice to level the scores at 18-18. But then, Wallace proved to be a good replacement for Brazil, as he nailed three points before Isac Santos closed the set by 21-25.

The second set started closer, with Brazil only one point ahead at the first stop (7-8). Crer enhanced his performance and spiked for the first local lead, and in the next point Sebastián Solé blocked Eder for a 12-10 score. With a big improvement in reception, De Cecco used well both Solé and Crer down the middle to stay in control (16-15), but another good entrance from Wallace revitalized the away side, to a tie in 18-18. A huge defense by De Cecco spurred Argentina ahead (20-18) and Solé served well to light up the crowd in 24-21, but Brazil powered back into the game. Lipe, with a soft touch, put out the fire in 24-24 and Brazil ceased the opportunity. A solid block by Bruno Rezende set the final score in 25-27.

Brazil showed some positive energy after winning an almost lost set, and with a short serve by captain Bruno stepped away to 4-7. Leandro Vissotto unfolded an outstanding block and the yellow team enjoyed a wide lead of 6-11, that widened to 7-16 with another counterattack of Lipe. Wallace opened the final moments of the set with numbers of 11-20 in the board and, as in Friday’s match, Brazil remained on top. Argentina gave points away and helped the away side to finish the deal by 13-25.