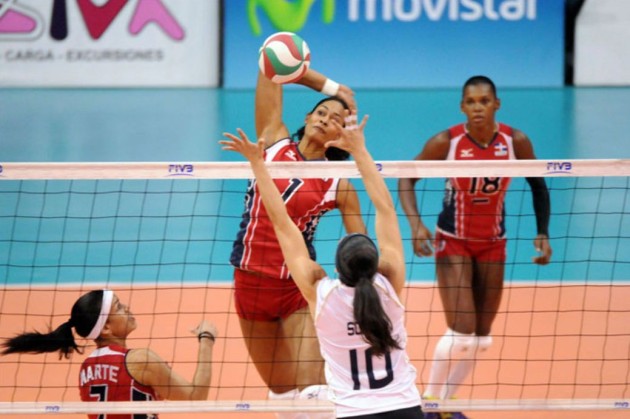 The victory allowed the Dominican team to secure a return to the podium they missed last year for the first time in the history of the competition when finished in fourth place in Ciudad Juarez, Mexico.

The load of the winning offense was shared by Prisilla Rivera, Candida Arias and Bethania De la Cruz with 13, 12 and 11 points respectively. Annerys Vargas chipped in with eight. Paula Nizetich topped Argentina with 11 points and Emilce Sosa had 7.

The winners held advantages of 40-28 in attacks, 9-6 in blocks and 5-2 in the service aces category.

“To be in the final is something the team deserved after working very hard,” the Brazilian Coach of Dominican Republic Marcos Kwiek commented. “We celebrated during the match and now we need to concentrate for the final match which will be a tough one no matter the rival.”

“Argentina is a fiery battling team and thank God we were able to defeat them,” Dominican Republic’s Captain De la Cruz said. “We are very happy about reaching the finals as we worked hard to get there.”

Guillermo Orduna, the Argentinean coach said: “The team didn’t play well, played too relaxed. It was a very atypical game and we were carried out by the intensity of the match.”

The captain of Argentina pointed out the factor of lack of focus as one of the main reasons for the defeat.

“We entered in the court out of focus and Dominican Republic played very well and they deserve our congratulations. Now we only have to battle for third place.”

CRO: Summary of the women’s and men’s...