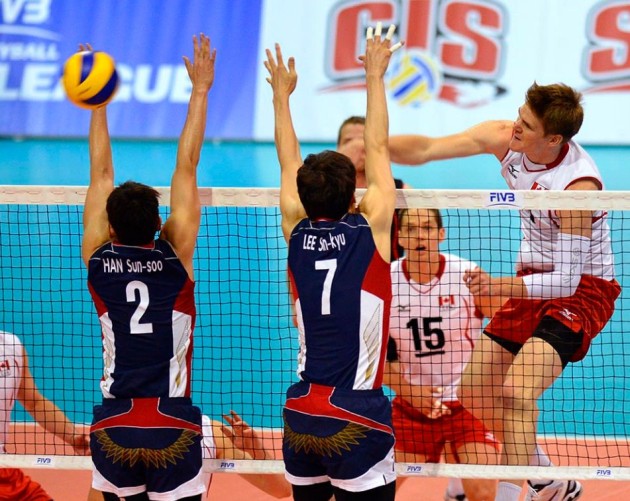 Korea was no match for the Canadians in front of their 2,300  home crowd fans. Although Korea looked sharper off the start, with their middle blockers attacking well, Canada responded with another straight set win. (Friday night they also finished the Koreans off quickly – 25-19, 25-10, 25-18).

“Our goal is to be number one in our pool and to do that we need to have weekends where we get two wins in a row,” said Canada’s Gord Perrin. “It’s really tight and it is huge for us to get these wins.“

Perrin of Creston, BC, was Canada‘s top scorer with 16 points, followed by right side Dallas Soonias of Red Deer, AB, with 15.  Soonias hit his stride this weekend, as he is replacing Canada’s star attacker Gavin Schmitt who is injured.

Korea‘s Kwang-In Jeon did manage 16 points and was Korea‘s top scorer against Canada this weekend.

Canada‘s coach Glenn Hoag was satisfied today after losing the second match of the previous weekends games (against Netherlands and Portugal respectively). “I’m very happy with the win. Korea played better (than last night). We made some tactical adjustments and got some key points,” Hoag said.

The win brings Canada to four wins and two losses, and Korea now has four losses and two wins in 2013 World League matches.

Canada‘s captain Fred Winters of Victoria, B.C. knew Korea would bring a better game tonight, but the Canadians didn’t panic. “We were firing on all cylinders, even when they were beating us, we were composed,” he said.

“One of the key factors in tonight’s win was an improvement in the Canadian team’s ability to match the Korean defense. We were able to win many of the long rallies, which doesn’t usually happen,” said libero Dan Lewis (Oakville, ON).

Korea‘s coach Ki-Won Park was obviously disappointed: “We did play better in the serve receive and ran a few more attacks in the middle, but it is very hard against Canada to sustain a run of points.“

Canada now heads to Finland (June 28-30) and then Japan (July 5-7) to continue its campaign to finish at the top of Pool C and advance in the tournament.

In World League, each pool will play over six weekends before the finals take place from July 17 to 21. Six teams will qualify for the World League Finals featuring the top two teams from Pools A and B, plus the winners of Pool C and the host country (Argentina).