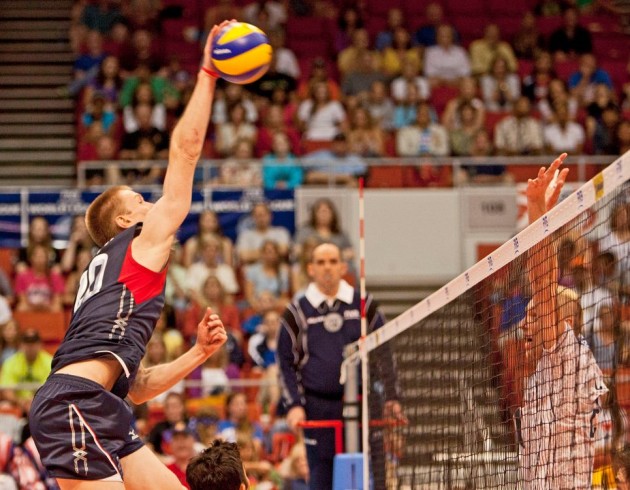 Outside hitters Matt Anderson and Paul Lotman each scored 21 points for the United States. Lotman, who substituted in for Tony Ciarelli in the second set, was named the Player of the Match. Middle blocker David Smith added 18 points.

France was paced by Earvin Ngapeth with 23 points. Mory Sidibe and Julien Lyneel each added 15.

France took a 3-0 lead to open the first set on three straight U.S. errors. Two kills from Ngapeth and one by Lyneel helped it take an 8-5 lead at the first technical timeout (TTO). Coming out of the break, the U.S. scored twice on kills from Kawika Shoji and Smith. But France answered with a quick kill by Le Roux. With France leading 13-12, the European side scored five straight points, including two kills from Lyneel and three U.S. errors, to increase its lead to 18-12. Ciarelli and Holmes ended the run with a block and sparked a four-point U.S. run that pulled them to within one point at 18-17. With France leading 23-20, the U.S. put together a two-point run on a block by Anderson and Smith, and kill from Ciarelli. France called timeout and the next U.S. serve went into the net. A block by Ngapeth gave France the set 25-22. Lyneel led France with seven points. Anderson scored six for the U.S.

France took a 6-2 lead in the first set, including an ace by Le Roux and kills from Moreau and Ngapeth. Speraw called timeout and brought in Lotman for Ciarelli. With France leading 7-3, Clark scored with a kill, then moved into the serve and opened with an ace. The U.S. got three more kills and another ace from Clark to take a 9-7 lead. With the U.S. leading 15-12, Hardy-Dessources scored on a kill and block and Ngapeth added an ace to tie the score at 15-15. A strike by Lotman gave the U.S. a 16-15 lead at the second TTO. Coming out of the break, Team USA scored on attacks by Holmes and Lotman to lead 18-15 and France called timeout. France pulled back to within one point at 20-19 and again at 22-21. A France violation and Lotman kill gave the U.S. set point and after a U.S. serve Smith ended the set with a kill as the U.S. won 25-22.

France led 8-6 at the first TTO of the third set, getting four points from Sidibe on a block and three kills. The teams battled back and forth, with France maintaining a two-point lead of 16-14 at the second TTO. Coming out of the break, a France kill attempt flew long. The U.S. scored on a kill and block from Lotman to lead 19-18 and France called timeout. France tied the score with a block and the teams battled back and forth. France reached set point at 24-23 when a U.S. serve went out of bounds. Smith tied the score with a kill. France came back with two straight back-row attacks from Ngapeth to win the set 26-24.

The teams kept the scores close to open the third set. With France leading 7-6, the U.S. scored twice on a Troy strike and Smith kill to lead 8-7 at the first TTO. Smith scored on a block coming out of the break to give the U.S. a 9-7 lead, which the North American side maintained, leading 16-13 at the second TTO. France came out of the break and scored on a Ngapeth kill and a block by Nicolas Le Goff. With the U.S. leading 17-15, Sidibe scored on two straight kills to tie the score. A U.S. hitting error gave France the lead at 18-17. France increased its lead to three at 22-19 when the United States called timeout and scored on a Lotman kill and two straight aces to tie the score at 22-22. Team USA reached set point first at 24-23, but Moreau fought it off with a kill. The United States reached set point four more times, with France fighting it each time. Finally, with the score tied 28-28, France’s serve went long giving the U.S. its sixth set point at 29-28. A block by Anderson and Holt gave the U.S. the set at 30-28.

The teams were tied 5-5 in the tie-breaker when Anderson scored with a left-side strike and France hit its next kill attempt out of bounds. The U.S. scored on two more kills and an ace from Smith to lead 10-5. The U.S. reached match point at 14-8 on two straight Lotman kills. After a U.S. service error, it won the match on an Anderson kill.