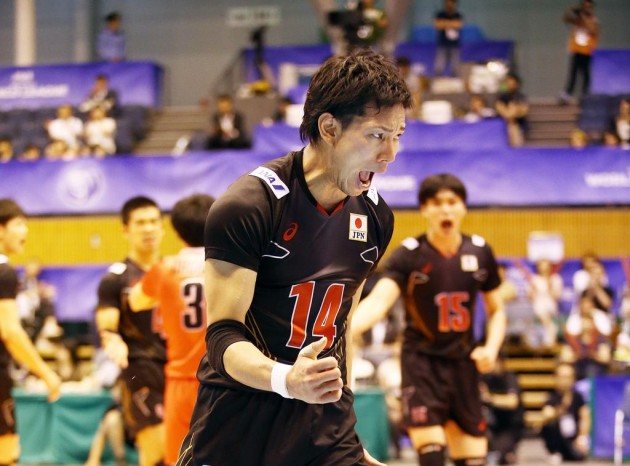 Japan was led by an aggressive Tatsuya Fukuzawa with 24 points, and was supported by Yu Koshikawa with 16. Leading Finland was Urpo Sivula with 14 points and Matti Oivanen with 12, including four blocks.

Finland looked much better out of the gate compared to Saturday, with Matti Oivanen putting a hard block on Koshikawa for a score and Mikko Esko driving a spike for a 6-2 lead. But Japan would battle back with defensive hustle, tying it at 16-16 with a smart Koshikawa spike off the block. It remained close until late, but Finland snatched the set 25-23 with strong blocking from the Oivanen brothers, each with a pair of blocks in the set.

Japan bounced back to take an 8-5 lead at the first TTO in the second set, but the aggressive Oivanens brought Finland back to 9-9. After a Koshikawa ace put Japan back ahead 14-11, Finland’s Sivula brought three spikes and an endline ace to make it a one-point game at 19-18. But with Koshikawa serving strong, Yusuke “Gottsu” Ishijima evened the match at a set apiece with a spike.

The third was a scrappy affair, with Finland grabbing a 10-6 edge as their block still proved effective against the attacking Fukuzawa. But Japan was sparked by great play from libero Takeshi Nagano as well as Gottsu off the bench, eventually going ahead 15-14 when frustrated Finnish coach Tuomas Sammelvuo received a red card. But it was more Gottsu late on, frustrating an attacking Antti Siltala with a block to make it 21-17 and serving well as Japan took the third 25-19 and with it a 2-1 lead.

Fukuzawa kept up the strong serving, dropping a pair of consecutive aces on Finland early, helping his side up 8-5. Great attacking from Koshikawa kept them ahead, with Kota Yamamura posting an emphatic block (his third) to make it 16-11 for Japan. But Finland showed great heart coming back late, with spikes from Jukka Lehtonen and Niklas Seppänen bringing them within one at 21-20. But Fukuzawa’s 24th point would finish it off 25–22, handing the match 3–1 to Japan.