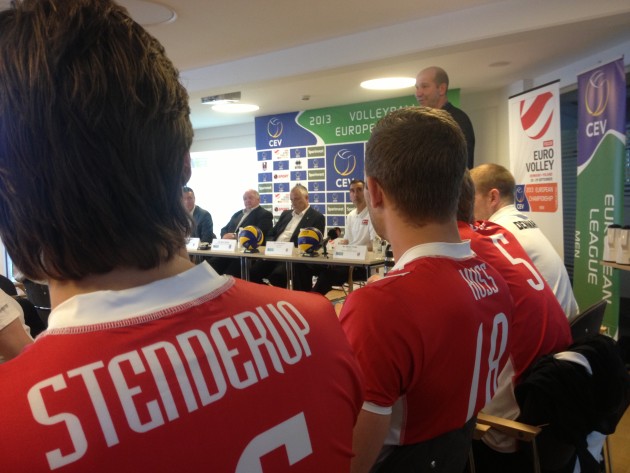 A press conference was held on Tuesday at Idraettens Hus (The House of Sport) where the head coach of the Danish national team Fred Sturm did explain the mission his group has embarked on for this season. “Every match we play on our way to the European Champs is part of a long-term learning process. We know we can play good as long as we play aggressive and we create the right opportunities. This can happen even with the strongest teams and we showed that attitude last Saturday as we beat Austria in Vienna. For the time being we keep our focus on the European League and do not think too much about the EuroVolley. This is a very special goal but if we want to play good there, we have to focus on playing good now. This is a process leading up to the European Championship and so the team shall perform its best by September” he stressed.

The Managing Director of the Danish Volleyball Federation Mikael Trolle expressed his joy for seeing Denmark play in the European League for the second consecutive year together with some of the best sides in Europe. “The European League comes at the right moment for us as we still have three months to go for our home European Championship. I do hope that this tournament will help us fine tune our preparations as organizers and see the team step up the quality of their play” he said.

Denmark is currently ranked fourth in Pool A with 3 points after losing in straight sets to Belgium and Slovakia and beating Austria 3:0 this past week in Vienna. Denmark debuted last year in the European League finishing their inaugural campaign in seventh place.