On Saturday Belarus claimed its match at Metrowest sports hall in Ra’anana in the second day of second round action in Pool C of the 2013 CEV Volleyball European League – Men. Belarus beat Pool leaders Croatia 3:1. Ivan Raic and Siarhei Antanovich were the top scorers. 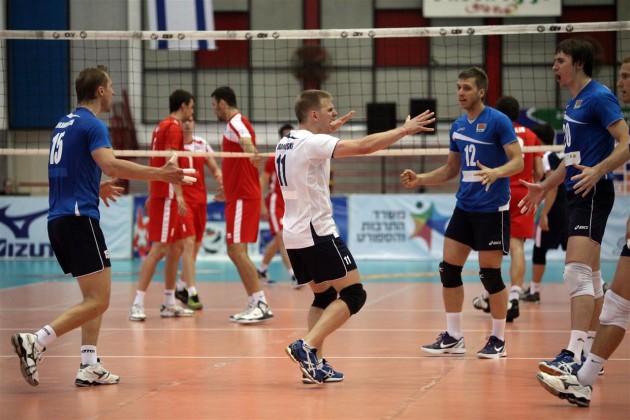 After edging Turkey on Friday, Belarus upset Croatia that was coming off a defeat to the young Israeli team. Belarus set the tone of the game in the first set (12:10) and even though Croatia did fight back to 15 all, Siarhei Antanovich contributed three set balls for his side (20:17) and the second chance for the 1:0 was cashed only a few moments later (21-18).

Belarus went up also in the second set (12:8) and after a time-out and substitution – Ivan Cosic joined the game – Croatia could level the score at 16 all. After another tie at 18, Croatia changed gear and could make it 21-19 and 1:1 in sets.

Belarus looked very determined in the third set setting the pace at 6:4 but Ivan Raic killed a few spikes to make it 10:8 for Croatia. Belarus flipped the charts round and broke away in the score (14:10, 19:16) closing it at 21-19.

In the fourth set the score remained very close up to 12 all before Belarus got momentum and could power to their second consecutive win in Ra’anana (21-18, 3:1).

Croatia’s Ivan Raic top scored in the game with 16 points while Antanovich paced Belarus with 15.