The United States handed Bulgaria its first loss of the 2013 FIVB World League on Friday, defeating the European side 3-0 at the Reno Events Center. Matt Anderson, Carson Clark and Tsvetan Sokolov were the top scorers. 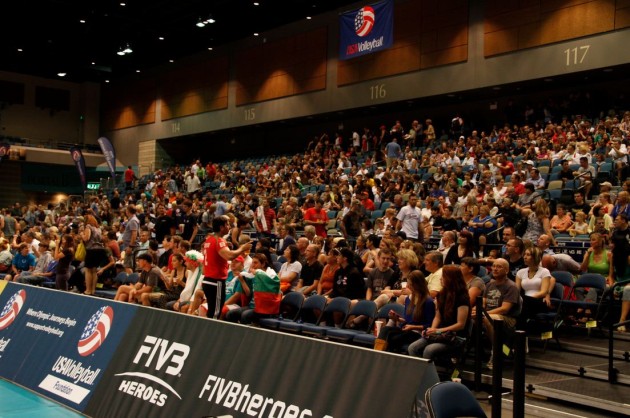 A large crowd watches the U.S. play Bulgaria in Reno

The teams now have twin records of 4-1 in Pool A. They will play again on Saturday at the same venue.

Matt Anderson, who was named Player of the Match, led the United States in scoring with 15 points on 13 kills and two blocks. Carson Clark added 11 points on nine spikes and two aces.

Bulgaria’s Tsvetan Sokolov led all scorers with 19 points on 18 attacks and one ace.

The U.S. opened up a 5-0 lead in the first set behind the serving of David Smith and led 8-3 at the first technical timeout (TTO). With the U.S. leading 13-8, the Americans scored two straight points on a Kyle Caldwell dump and block to lead 15-8. USA were leading 18-12 when Viktor Yosifov scored on two straight aces to pull to within four and the U.S. called timeout. Yosifov’s next serve went out of bounds. The United States reached set point at 24-19 and Valentin Bratoev served into the net to give USA the set.

Bulgaria seemed to find new life to open the second set and took an 8-4 lead at the first TTO, getting three points on kills by Sokolov. However, the U.S. came out of the break and scored four straight points, including a kill and ace from Clark, and tied the score at 8-8. The teams battled back and forth until the score was tied 12-12 and Team USA scored on a Maxwell Holt block and Clark kill to lead 14-12. With Team USA leading 19-18, Holt scored with a kill and block to put the North American side up by three and Bulgaria called timeout. The United States reached set point at 24-20. The European side held off the loss with kills from Sokolov and Yosifov and the U.S. called timeout. Sokolov’s next serve attempt went long to give the U.S. the victory.

The score was tied 6-6 in the third set when the U.S. scored on Bulgaria’s service error and Smith’s kill off Bulgaria’s block to lead 8-6 at the first TTO. Coming out of the break, Bulgaria scored four straight points behind the serving of Bratoev, who had an ace on the run as Bulgaria took a 10-8 lead. With Bulgaria leading 13-10, Team USA scored on two Anderson spikes and Bulgaria’s hitting error to tie the score at 13-13, and Bulgaria called timeout. Bulgaria came back to lead 16-14 at the second TTO. The U.S. came back to tie the score at 19-19 and reached match point first at 24-21. Clark scored the final point on a kill off the block.

SPIKE OF THE YEAR: Leo scores from...