WL M: The Netherlands downs Finland, continues at the top 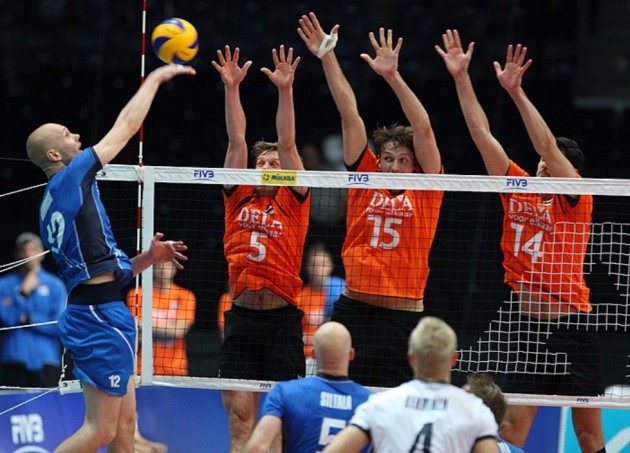 For Finland, it was the fifth consecutive loss, after losing twice in Japan, and losing both games against Canada at home last week. With nine points, the Finns have to cast a worried look toward Japan, who has eight points, and two games with Canada coming up. The two last teams will have to qualify to stay in the World League.

The Netherlands had its best player in the two-meter tall Niels Klapwijk who hit no less than 25 points, spiking 23 of them. Klapwijk had considerable success making points off the opponent’s blocks. He has come back strongly after being sidelined with injury.

Wytze Kooistra, the team’s top scorer, sat out a few times and did not look the man who spiked 103 points in the previous games. But he became important in another role, as a blocker, with four points but also several times helping out in successful plays. Maan Jelte, the shortest playing Dutchman was surprisingly effective with 15 points. Also Jeroen Rauwerdink reached 15.

Finland picked up its game substantially from the previous weekend against Canada, and its main man Mikko Oivanen finished with 19 good points, but his mighty arm seemed to be tiring toward the end. Oivanen’s fate was to do a few costly mistakes. Olli Kunnari had 15 points and Antti Siltala 9.

Neither team could at any time create bigger gaps. A stretch of five Dutch points early in the third set was the biggest run, but a good spell with four points against one going to 23-20 in the fourth proved valuable. The effective Klapwijk scored three of Netherlands‘ four last points.