Poland beat the United States of America in five sets in the sixth week of the 2013 FIVB World League in Katowice, Poland on Friday. Jakub Jarosz and Carson Clark were the top scorers. For more latest volleyball news visit worldofvolley.com 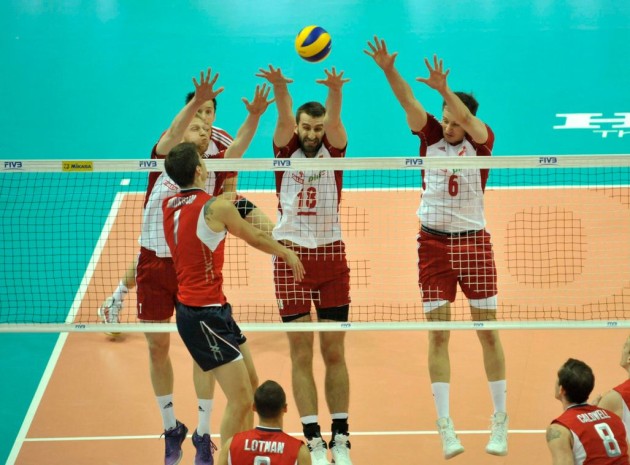 Jakub Jarosz of Poland was named the MVP of the match and was the best scorer for his team with 21 points. Carson Clark of the USA topped all scorers with 24 points.

Both teams were a little nervous and made some unforced errors at the beginning of the match. The Poles were the first to shake off the stress and jumped ahead to four-point lead at the first TTO. However, the Americans followed with their turning moment, caught up with the opponent and gained advantage after scoring four unanswered points (11-9). The image of the play changed once again after the second TTO, when the hosts regain their focus, took three points in a row and then jumped into three-point lead at 23-20. Poland picked up the set 25-22 and set the overall score at 1-0.

The Americans scored another series of unanswered points and took the lead at 5-4. From that moment the play continued on a point-by-point basis. At 14-12 with the USA lead, Poland‘s coach Andrea Anastasi called time-out, which helped his team tie the score for a while, until team USA got the lead again at 17-14. The guests took control over the game and romped into victory 25-19 in the second set and tied the overall score.

Nervousness came back to the Polish team in the third set as the US remained in charge of the play and were leading 8-2 at the first TTO. Poland clearly lost their focus and coach Anastasi ordered some substitutions. However, it did not improve Poland’s situation as the guests jumped into an unbelievable twelve-point lead at 16-4. The Poles tried as hard as they could but with so many mistakes they were unable to catch up with the Americans, who were better in every element. The USA easily won the third set 25-13 and took the lead in the entire match 2-1.

Poland did not give up and came back on court for the fourth set highly concentrated. They quickly jumped ahead to five-point lead at 6-1, when the US coach John Speraw decided to call time-out. The Poles were unstoppable at that moment, though, and they were the ones with a large advantage at the first TTO (8-3). The guests managed to tie the score thanks to their captain Matthew Anderson and his ace (11-10) and strong spike (11-11). After that, the play continued on a point-by-point basis with the hosts remaining slightly ahead (16-14 at the second TTO). The break clearly improved the team’s shape as they gained another two points (18-14). Nevertheless, the Americans would not let the hosts get too comfortable, stayed closely behind and managed to tie the score at 23-23. The end of the set was a real thriller – the Americans wasted three match points, while the hosts took the set 30-28 with their third set ball.

In the final set, the White-Reds were in control in the beginning– they gained advantage and held tightly to it up until the first TTO (8-4). After that, though, the Americans managed to level the score at 9-9. The competition became very close and fierce, both teams showed a lot of strenght and self-control. In the end it was Poland who celebrated the victory 18-16 and 3-2 in the entire match.

The teams will meet again on Sunday at 8:15pm local time in Wroclaw, Poland.

WL M: The Netherlands downs Finland, continues at the top